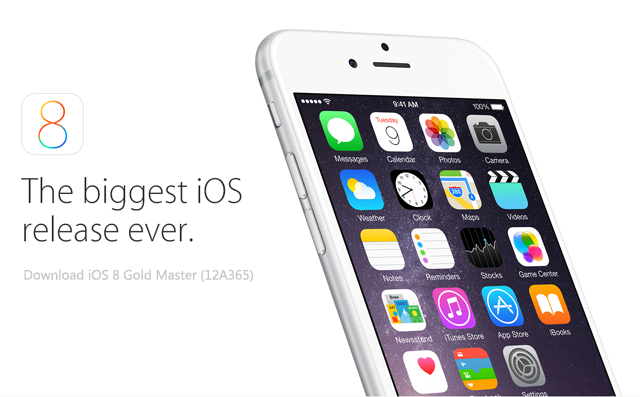 Apple’s first iOS 8 beta was released on June 2nd and the second one came just as expected two weeks later. Beta 3 came out 2 weeks before and soon after beta 4 came out. The final beta for the international market, the Beta 5 landed some time back and beta 6 was released only for carrier varients. After their big iPhone launch yesterday, Today Apple has released the iOS 8 Gold Master for the registered Apple Developers. The Gold Master edition is the Final Version that the Normal people will be geting next week.

You will see a Software Update to install iOS 8 Gold Master if you’re a Registered Apple Developer. If you don’t have a developer account and if you’re still on iOS 7, you can Follow my Tutorial on How to install iOS 8. That method is the safest method. This version will be better than the Previous Versions stablity wise. Give it a try.

Apple also announced the availability of the upcoming Final, Public Version of iOS 8 as September 17. If you don’t want to install it manually you can wait for it to be released to the public.