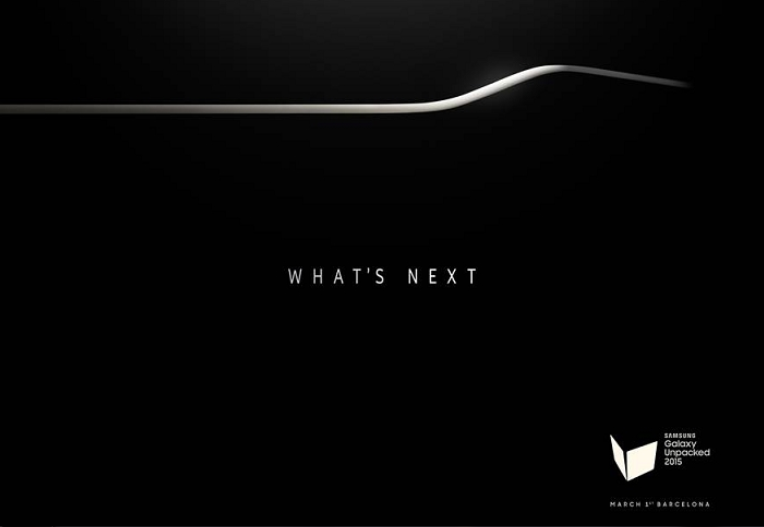 Finally, Samsung has officially sent out Press Invitations for the launch of the Galaxy S6. The Event will happen on the 1st of March at MWC 2015.

They have sent out a Teaser image with the tagline “What’s next”, which heavily hints at the Rumored Edge variant of the Galaxy S6; The Galaxy S Edge. This time around with the Edge variant we are expecting to see the curved design on both sides, rather than just one side like the Galaxy Note Edge does.

According to the latest Rumors, the Galaxy S6 will feature a 5″ QHD (1440 x 2560) Super AMOLED Display With the Exynos 7420 Octa-Core SoC and 3GB of RAM. Rumors say that Samsung might ditch the Snapdraggon 810 SoC this time around due to overheating. At the back, the flagship will feature a heart rate monitor, and a flasher like the Galaxy S5 but this time on the side of the Camera module. Talking about the Camera, Samsung will be using a 20MP Sensor on the Galaxy S6. We are also expecting to see a 5MP front facing Camera.

Checkout some recently leaked renders and leaks of the device below.

HTC will be holding their event also on the 1st of March at MWC 2015, and we are expecting to the New HTC One M9 along with the HTC One M9 Plus make its debut. It sure is going to be a busy day. Are you’ll excited for it as I am? Let me know your thoughts in the comments section below.