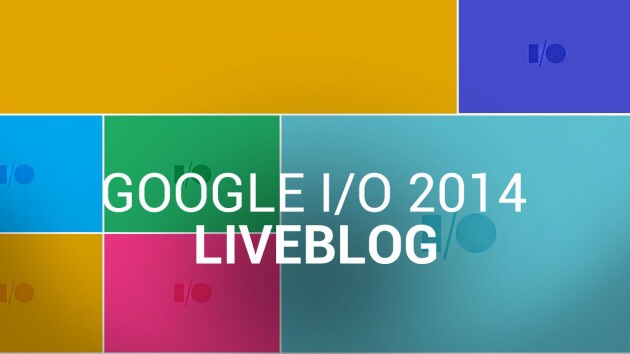 Sundar Pichai is on stage people, we are just going through the extended locations of Google I/O

He’s now discussing about Android and its usage in general, and emphasized the fact that it has 1 Billion 30 day active users, he seems to be having a device on his wrist which looks like a Moto360, looks like we’ll be hearing something about Android Wear tonight.

Now Pichai is discussing about Android One which provides OTA Updates just like Nexus and GPE Devices,and shows it on a MIcromax device.

Android L Dev Preview is what’s being talked about now, we’ve seen a few pictures and it looks AWESOME!!. Android Metering Device is being previewed, this is a mobile screen that allows a sense of depth and a 3D effect. The newest API known as “Pallette” shows some new animations and other details.

He is using a Nexus 5 to demo the new UI, the new animations and UI looks smooth, fast and clean.

Avni Shah, director of product management for Chrome, takes the stage. She says that Chrome has over 300 million active daily users of Chrome on mobile. Good news folks! Material will work on Chrome as well.

She said that the animations will even work on Google search.

The new tab switching interface has a card like look, that is really nice and minimalistic.

Dave Burke is back on stage and he is talking about ART, Good news Devs Y’all wont have to work much to make apps work on ART according to Burke.

There is an Android extension pack to help Game Devs to work with graphic bits like tesselation, geometry shaders etc…

Now we’re discussing Project Volta, this is to optimise every Android subsystem for better battery life, the new API known as JobScheduler.

Wooohoo!!! SDK and early system images for Nexus 5 and Nexus 7 going up tomorrow.

Pichai back on stage…

He’s talking about Android security now,he is going over the Android app auto-scanner services, Google will push security patches through Google Play instead of Android updates from now on!.the much talked of Killswitch feature is now a reality.

There’s also a “Universal Data Controls” feature in L, a single place where you can adjust all of your privacy settings for all of your apps.

Dave Singleton on Stage.. Get ready for Android Wear!

he says “People check their phone 125 times a day” and Android Wear is going to cut down on that number.

DEMO WITH THE G-WATCH!!

Its has always on notifications, raising the watch up turns the display from black and white to color.

Seems like the Google Notes app didn’t work out so well..

Answering calls is easy as swiping up or down..

Android Wearables can control other devices. “Play some music,” starts music on the phone. But the controls stay on the watch, and the album art displays too.

Whoah!! looks like Android Wear can be your right hand man, they’re shoing how it would help you on a trip to Brazil.

SDK time again boys.. It automatically syncs notifications to Android, including rich notifications. Devs can make apps with voice replies and notification pages, The FULL SDK will be out soon.

we see a Moto360 when he attempts to demo ordering a pizza.

it worked!! He ordered a pizza from Eat24

When you install an Android app on your phone, it automatically installs and updates its watch counterpart. this is really cool and makes our lives much easier.

WHOAH!! the Samsung Gear Live is also available to order!!

Moto 360 will be available for sale later this summer.

Ohhh now this i like.. we’re talking about cars now

Its called Android Auto… it has to do with the Open Automotive Alliance we spoke of earlier, it’s a redesign of the Android UI for the car.

It’s contextually aware and also voice activated…AAANDD it’s got a Google Now styled UI. Since they couldn’t drive a car onstage they chopped up a car.

All messaging apps will be voice compatible. that makes driving much easier

Dave is back on stage, and he announces Android TV…

Android TV can support inputs from HDMI, receivers, etc. the interface of TV is really simple and minimalistic which is something we love.

Now he’s playing NBA Jam, these games are Android level which means they’re ok but not really out of the ordinary.

Android TV supports Google Cast, so you can use it just like a Chromecast.

there will be a TV centered Play Store experience.

The entire 2015 HD and 4K smart TV ranges from Sony, Sharp, TP vision, and Philips will run on Android TV.

Android TV can run on a ton of different processors.

It’s ChromeCast now with Rishi Chandra. He says that usage has increated 40% since 2013. Most of YouTube’s TV-based views come from Chromecast.

There’s a new webpage, chromecast.com/apps , which will tell you which apps support it.

Now anybody can cast to your TV without needing to be on your Wi-Fi network. which is really useful as you dont need to bother with disconnecting and reconnecting to a different network.

Chromecast will do stuff when you’re not watching TV. It’s called Backdrop. It lets you select a feed of photos, including your own, to the stack of pictures shown on an idle TV. It only shows you albums from Google+.

FINALLY: you’ll be able to mirror your Android device to your TV!!!
You can mirror anything, including the camera app. we are really getting hyped now

Sundar Pichai is back to talk about laptops, more specifically Chromebooks, Ten of the top ten highest-rated laptops on Amazon are Chromebooks. that’s awesome.

Pichai is going to get Android closer to Chrome OS. You can use your phone to automatically unlock and sign-in to your Chromebook. Notifications are mirrored between your phone and Chromebook, including calls and texts.

HE’S SHOWING A PREVIEW!! Evernote running on a Chromebook. and he also demos Vine and Flipboard.

Now  he says that the L release of Android will let personal and corporate applications live on the same device.

Pichai thanks Samsung for contributing all of their work in Knox to the Android platform. so this is basicaly taken from Knox

Google Slides is coming to Android. to create slides from your mobile device. Quickoffice is now built into Docs and Sheets, they can natively edit Microsoft office files. No more converting, no more wondering if you need to open a thing in whatever app. And it can save to Word files too. “You can always upconvert this to Google Docs,” Pichai says.

Google Drive has over 190 million 30-day active users. they are working to bring Drive to more people

Google is showing Devs some love with a video they’re showing.#

well persistence seems to pay off.. its working now

Google is providing new dashboards and monitoring for your apps in production.

Eric Schmidt onstage to talk about Cloud Data Flow, It seems that Twitter has helped them with this demo.

it only took TWO lines of code to do that!!!

It’s Ellie Powers on stage to talk about Google Play, We’re gonna hear about the dev tools for the developers.

Google has acquired Apurify to help with testing apps. Appurify can simulate a wide variety of conditions for apps.

it has a set of API’s to manage fitness data from apps and sensors, it can connect to any wearables and peripherals with your explicit permission.

Adidas and Nike have joined with Google Fit.

The SDK will be available soon.

Now its about Google Play Games, which has over 100 million users. Google has now added some new features to it includinga better profile and a better way to save games.

A Gear Live or G watch will be given to everyone upon leaving the I/O.

And everybody present will receive a Moto360 when released!!

That’s All Folks….Until next time, Thank You all for staying with us.