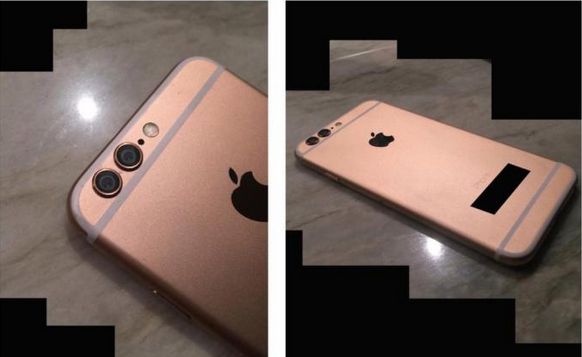 We know that Apple will unveil the Next iPhone in September like they always do. Today we have got the First leaked images of the device. The images were first revealed by 9To5Mac and it was sent to them by an anonymous source, and these images revel the iPhone 6s in Rose Gold along with Dual Cameras.

These images could be Photoshoped or these images could turn out to be fake, but it is possible that Apple is testing with prototypes at this point. The iPhone 6s that was leaked shows similarities to the iPhone 6 that is available right now baring a few changes like the dual camera sensors. The device pictured above also lines up with a recent report from KGI claiming the device would be available in rose gold.

The dual Camera area looks like it is photoshoped upon closer inspection, but it is not impossible to have. So this might turn out to be true. Apple could be using the Dual Cameara setup to improve the image by using both cameras or they can use it for depth sensing. We have heard that the next iPhone will have a bump in MPs, so this time around it will have 12MP instead of the 8MP that the iPhone 6 currently has.

Previous KGI note also claimed that the next iPhone would offer a Force Touch display, an extra microphone, 2GB of RAM, gesture controls and improved Touch ID. We might also see a larger iPhone 6s plus with a sapphire cover display in limited supply.

Right now, we can’tcome to any conclusions, so take this as a grain of salt. Share this with your friends who are waiting for the next iPhone, and let me know what you think in the comments section below.