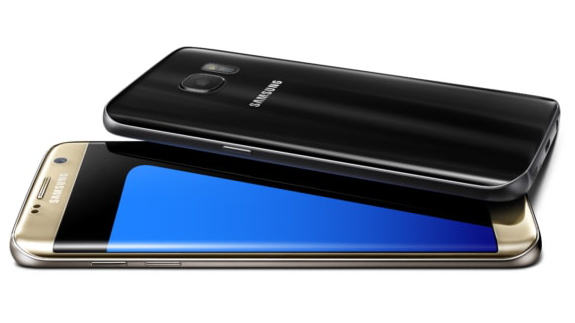 It’s finally time. “Project Lucky” code named Galaxy S7 has been finally unveiled by Samsung with some massive improvements. From the outside it might look much similar to the predecessor, the Galaxy S6, but don’t let that fool you because the S7 packs a lot more inside and outside than you think, starting from a Waterproof design, to a much better performing internals and camera. Let’s have a look in detail.

The Galaxy S7 retains the 5.1-inch, quad HD Super AMOLED display from its predecessor the Galaxy S6 but, the S7 Edge has a larger, 5.5-inch display.

Checkout the Galaxy S7 below.

Checkout the Galaxy S7 Edge below. Design wise, the S7 Edge now features slight curves towards its edges, for a more comfortable in-hand fit. Even the back of the regular S7 is curved just like Samsung did with the Galaxy Note 5, so it is much more comfortable to hold in the hand now. The biggest change on the Galaxy S7 is the return of Water resistance. The Galaxy S7 features IP68 Water resistance and this makes the phone durable without adding any extra bulk or covers to the device. I’m sure this is one of the most interesting changes a lot of people will be excited for. Water Resistance just makes me want to have this phone more. Color options for the S7 & S7 Edge include silver, gold, white and black.

The S7 & S7 Edge features the Snapdragon 820 SoC or the Exynos 8890 SoC (Based on where you buy it from) inside with 4GB of Ram. The processor brings a 30% improvement in CPU performance and up to 60% boost in GPU performance according to Samsung. Gamers can rejoice thanks to a newly adopted support for Vulkan, which promises amazing mobile graphics. It has 32GB of internal Storage as well as a Micro SD Card slot, which many of you will like.

The Galaxy S7 has a 3000 mAh Battery and the S7 Edge has a 3600 mAh Battery. Both should last you a full day. Both devices can also be recharged blazing fast with wired and Wireless Fast Charging (WPC and PMA standards). Other hardware features include Dual-band Wi-Fi ac, MIMO, Bluetooth v.4.2, ANT+ and support for both NFC and MST and payment systems that rely on them. The S7 & S7 edge still has the USB 2.0 Connector at the bottom. The speakers are located at the bottom as well, along with the headphone jack.

The display on the Galaxy S7 & S7 edge are also Always on Displays. What this does is show you basic information like the time, calendar or notifications, without you having to wake up the phone. Since the S7 & S7 Edge has an AMOLED displays, only a few pixels light up to show this information, so the battery drain from having Always-on Display is minimal. Additionally, the feature will turn off when you put the phone in your pocket. This will be a great feature for power users who always glance at their phones.

The Camera on the Galaxy S7 is also impressive. It features a 12MP camera with a lot of Key improvements, and making low light images much better, which again is one of the key aspects.

According to Samsung the new Camera captures 95% more light than the S6 and features the first Dual Pixel sensor for fast focusing. This new 12MP camera has less, but larger individual pixels, and larger pixels have the advantage of better capability to collect light.

The Aperture on the Camera is f/1.7, which is the widest ever on a phone.): a wide-aperture lens allows more light in, which again is key for better images in dim conditions. The camera also features optical image stabilization (OIS), which helps the camera shoot faster, resulting in less blurry images. Another curious detail is the added support for Dual Pixels. A first in the smartphone world, Dual Pixel is a technology borrowed from dedicated cameras that allows for faster focusing by combining information from two pixels on the camera sensor. Samsung claims the S7 Edge is faster than other leading phones when focusing. For all of you interested, The 5-megapixel front facing selfie camera also features an f/1.7 wide-aperture lens. That should be great. Apart from all of these key improvements, there will be extra software features that allow the user to make more use of the hardware like a full on manual mode like we have seen in the past.

Moving on to the Software, the Galaxy S7 & S7 Edge are running on Android 6.0 Marshmallow with Touchwiz on top. This is a much improved version of touchwiz based on the early impressions and it looks much neater. Edge fans now have a lot more to get excited about thanks to an improved Edge Apps platform; the physical area is a lot wider offering more info at a glance.

Just as the leaks suggested, the Samsung Galaxy S7 & S7 Edge will go on pre-order at 8am EST on February 23rd, while the official release date is set for March 11th.

If you pre-order between February 23rd and March 18th, Samsung is also throwing in a bonus Gear VR headset ($100 value) and a 6-game bundle for VR worth $50. Pretty Cool deal don’t you think?

So will you be one of the first people to get the S7 or S7 Edge? I know that I will be. I’ll be picking up the S7 Edge, but I’m curious to know what you prefer. Drop a comment or Tweet me @banuathuraliya.

Share the in depth article with your friends to let them know that the Next Big thing is here.