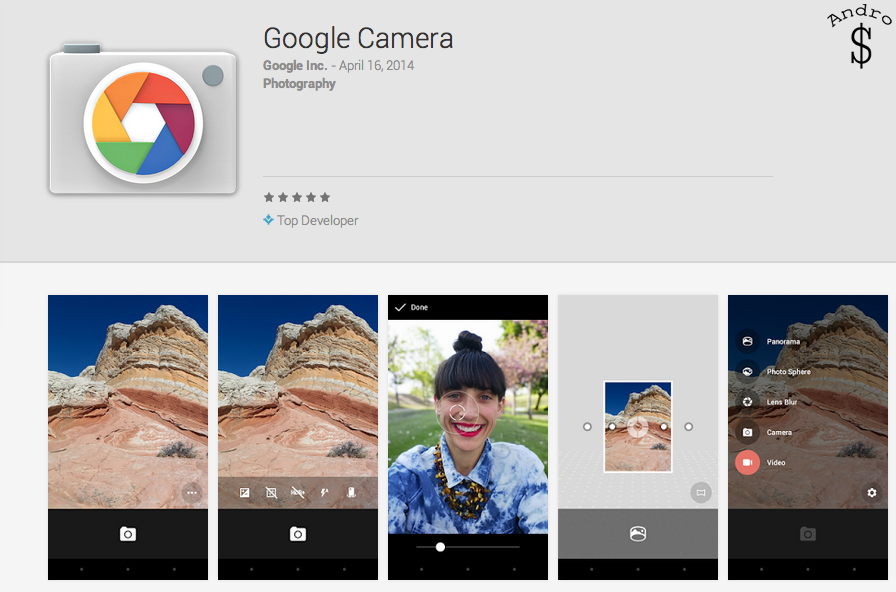 Google’s official Camera app has been added to the Google Play Store with additional features and a new interface. This is Awesome news because now they can update the app and anyone can receive the update easily rather than waiting for a OTA update. According to the change-log, the new app is designed for tablets and phones running Android 4.4 KitKat, though it doesn’t specify if there’s any other limitations beyond this.

As you can tell, the biggest change from the ‘stock’ Camera app found on devices like the Nexus 5 is the brand new UI. There’s also a new lens blur feature, the ability to undo a segment in photosphere that you don’t want, new animations when taking videos and images, and several other minor feature changes. There’s even the long promised viewfinder fix, and likely at least a few other bug fixes.

Here’s the full description of the modes for those interested,

Checkout the image Slideshow below for the interface options.

Here’s a Sample Shot of Lens Blur, much better images could be captured depending on the instance.

Here’s a Quick Video Tour of the Interface by Droid Life,

You can find the Google Camera app on the Google Play Store, or if you don’t see this because of device/ Country restrictions, you can download the APK from here.

Over all this new Camera App is Awesome. It let’s the users get SLR type photos using Lens Blur Feature, and the UI changes are pleasing. We would like to know what you think about the new Google Camera app, so leave us a comment down below after checking it out. Don’t forget to share the Great News with your Friends.