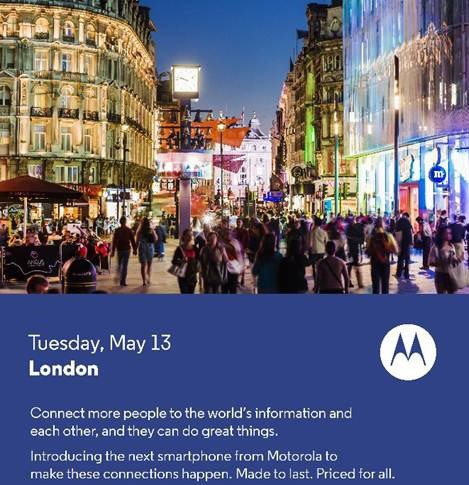 Motorola is going to have an event on May 13 according to the press invitations sent. The event will take place in London, two weeks from now, at 8:45 AM local time. The invitation hints that their next handset will be “Made to last. Priced for all.” So we think this time they will unveil the rumoured Super Budget smartphone.

This device’s model no is known to be XT1021, which reportedly will go by the name of Moto E. Although we don’t know for sure what to expect from the Moto E, previous rumours indicate the device will offer a 1.2GHz dual-core CPU, 1GB RAM. 5MP camera, a 4.3-inch display, 4GB storage, a 1900 mAh battery and Android 4.4 KitKat and it seems decent low-mid range specs.

What’s more impressive is that this device is said to be Highly Budget friendly, so cheaper than the Moto G as well. The Moto G is sold for $179 unlocked, this means we could be talking about a handset that’s under $100, unlocked if that is even believable.

If Motorola really is preparing to unveil a device that’s priced lower than the Moto G, this could be a huge deal, especially for budget users and those in emerging markets. So what do you guys think about a Super Affordable Smartphone? Let us know in the comments below.