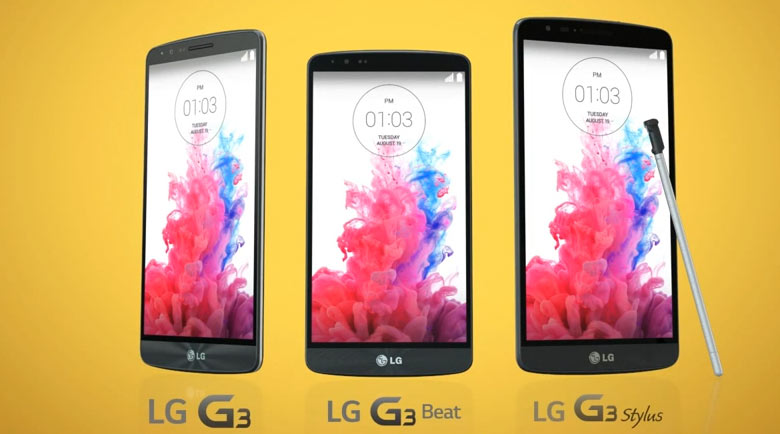 It looks like LG is going to step back in to the Phablet market, with it’s brand new device, the LG G3 Stylus; Weird Name Right? The news about this first leaked out when a Promotional Video for the LG G3 series came out earlier today. Near the end we see the Image that is on top, with the LG G3, G3 Beat and G3 Stylus.

When you just see it you know that it is coming to target the Galaxy Note line, with the Note 4 launching on the 3rd of September.LG Gave the Phablets a go once, with the VU line, but I think it is now safe to say that it is a Failed project. This time if they are going to launch a competitor to the Note series, they should launch something that’s actually comparable to the Note line, because as you may know, the Note devices are packed with power and features that actually makes sense.

In the Video, we get to see the G3 stylus next to the G3 and the G3 Beat and it looks slightly Bigger with a stylus holder. The Stylus itself looks like a capacitve stylus, which makes us doubt whether this will even make sense now that we have seen so much of success with the active digitizer on the Note Line. Checkout the Leaked Video below (LG has removed the Video so I have Embedded a Video from another Source).

There’s also the appearance of what seems to be a single LED flash, rather than the dual element on the G3, suggesting that the G3 and G3 Stylus won’t just be copies of the same hardware, with the addition of that stylus holder, and additional changes could be present within. So this immediately downgrades the device in my opinion.

While this is an official LG video that reveals the G3 Stylus to us, we’ve yet to see the company make any formal announcement about the phone. So stay tuned to Andro Dollar for the latest on the G3 Stylus.