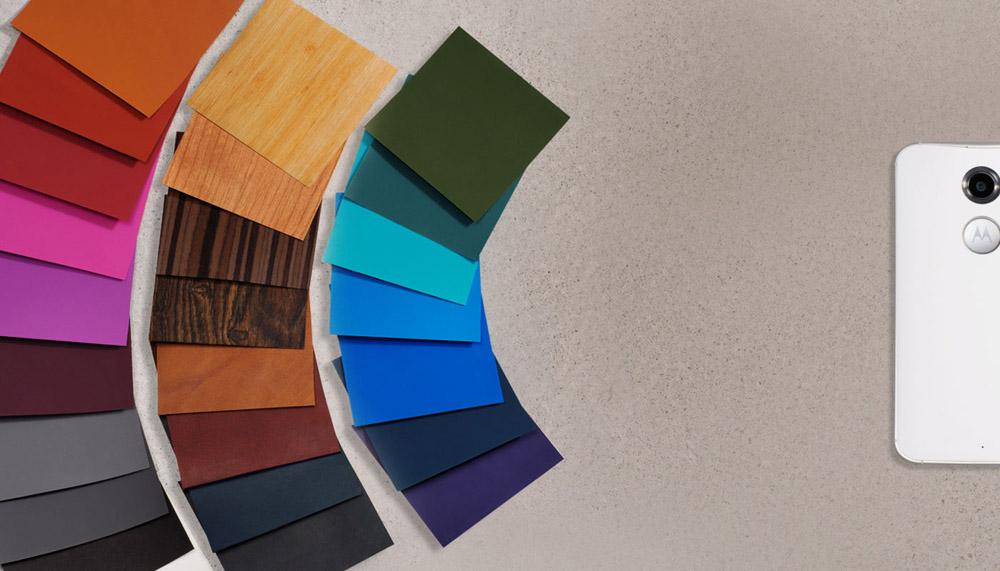 Motorola held a Special Event in Chicago to unveil the Next Generation Moto X, G, The all new Moto Hint and the Moto 360. We already took an indepth look at the Moto 360, so now let’s take a look at the other 3 devices.

The 2014 version of the Moto X will also be called the Moto X, not X+1. The newcomer features beefed up specs and improved finish compared to the 2013 Moto X. Checkout the Trailer of the Moto X,

As the company’s brand new flagship, the new Moto X features a decidedly more upmarket appearance thanks to an aluminum frame and available back covers finished in Horween leather. The already familiar wooden covers are available too – this time around they are made from FSC certified trees.

Naturally, just like in the case of its predecessor, users will be able to customize the new Moto X though Moto Maker in the United States. The interface of the shopping service has been greatly improved for an even better experience. The specs of the new Moto X include a Qualcomm Snapdragon 801 chipset with 2.5GHz quad-core CPU, Adreno 330 GPU, and 2GB of RAM. There will be 16 or 32GB of built-in, non-expandable memory on board of the device.

Display of the new Moto X is a 5.2” 1080p AMOLED display with 423ppi and Corning Gorilla Glass. The device’s main camera is a 13MP unit with dual-LED rind flash, and 4K video capture.

The latest Moto X boots stock Android 4.4.4, garnished with a few exclusive Motorola additions. They include improved voice commands, as well as handy gesture controls that utilize IR sensors built into the front of the device.

This year’s Moto X will be available later this month in a number of Markets that include the United States, Mexico, France, Germany, and the United Kingdom. The smartphone will cost $99.99 with a two-year contract on AT&T or Verizon, or $499.99 unlocked, sans contract.

Just like the Moto X, the 2014 version of the Moto G, will be called the Moto G. The successor of Motorola’s best selling smartphone offers improved key features and specs, yet it retains the barely believable $179.99 price tag. Checkout the Trailer of the Moto G,

The new Moto G packs a 5” 720p IPS display with impressive quality, covered by Gorilla Glass. The screen is flanked by a duo of stereo speakers, which add a massive dash of appeal to the device, and help set it apart from its competitors.

Like its predecessor, the new Moto G packs a Qualcomm Snapdragon 400 chipset with 1.2GHz quad-core CPU, Adreno 305 GPU, and a gig of RAM. The device will be available with 8 or 16GB of built-in memory, which can be further expanded via a microSD card slot. The latter can be found under the device’s swappable back cover.

The camera of the new Moto G is an 8MP f/2.0 unit, coupled with a 2MP front-facing snapper. Users can use the volume rocker to activate the camera shutter. The already familiar array of customizable cases and covers will be available for the new Moto G at launch. Motorola also released an external battery for the device for $39.99.

In addition to the United States, the Moto G will also be available starting today in India, France, UK, Brazil, Spain, and Germany. The manufacturer will expand the device’s availability to even more markets before the end of this year.

Alongside the new Moto X, the manufacturer announced an ultra-small, premium Bluetooth headset dubbed Moto Hint. The device allows users to operate their phone with voice commands while keeping out of sight. Checkout the Trailer of the Moto Hint,

The main feature of the Moto Hint is being able to control your phone with your voice. Want to call someone, send a message, locate an address, update your Facebook status, or just check the weather? Just say “Ok Google” followed by your query the way you would in Google Now.

There are no buttons to press and the Moto Hint constantly listens to your voice to pick up the ‘Ok Google’ command. You don’t have to get your phone out for that or even look at your smartwatch. Your voice does the trick and the headset alerts you through the speaker. The Moto Hint has audio pass through feature, that lets you hear the sounds around you as if nothing was plugged into your ear. When you pull it out your ear, it automatically switches off. Put it back in, and it switches on.

The Moto Hint has a talk time of ten hours. It comes in a special case that can also charge the device when you plug it in.

Moto Hint will be available in the United States for $149.99 later this fall. It will hit more markets in time for the holidays.