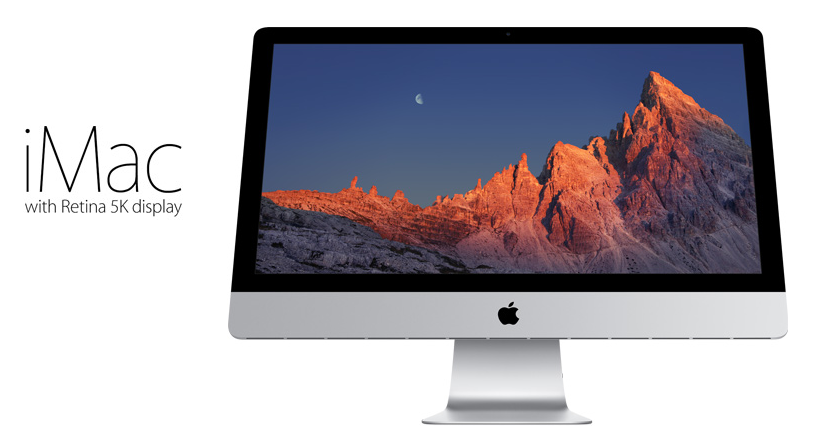 Apple unveils a 27″ iMac with a 5K Retina Display

Apple has unveiled an all new iMac at it’s Apple Event today along with a new Mac Mini. Starting with the beautiful Retina display, the new iMac is tailor made to not disappoint on any end.

It has a mighty 5K Retina display with a resolution of 5210 x 2880 pixels on a 27-inch panel, it’s hands-down one of the best displays out there on a desktop computer.

According to Apple, The iMac boasts the “World’s Highest Resolution Display” with a total of 14.7 million pixel. It has 67% more pixels than a 4K panel. That explains everything. This display is a Killer Display.

To drive all those pixels around the display, Apple even worked on a new tech which they call the ‘Timing Controller’, which increases the overall bandwidth of graphics. Apart from that, the display feature ‘Organic Passivation’, which reduces pixel cross-talk and saves energy.

The new iMac is just 5mm thick around the edges, making it the sleekest iMac we’ve seen to date. The rest of the design of the new iMac remains the same.

The base model of the iMac with Retina display ships with a quad-core Intel i5 3.2GHz processor with the option of going all the way up to an i7 clocked in at 4GHz. In the graphics department, the new iMac is driven by an AMD Radeon R9 graphics chip, and it is a much faster option than what ships with the current generation iMac. It has 8GB of RAM as standard, with the option of expanding memory. It also has a 1TB Fusion Drive for storage. Let’s talk about the price now. The new iMac start from $2499, and prices go up as you start customizing the desktop according to your own liking. The new iMac ships today and can be bought directly from the Apple Store. Anyone getting an iMac? This looks like a Worthy Device to get if you have the cash.