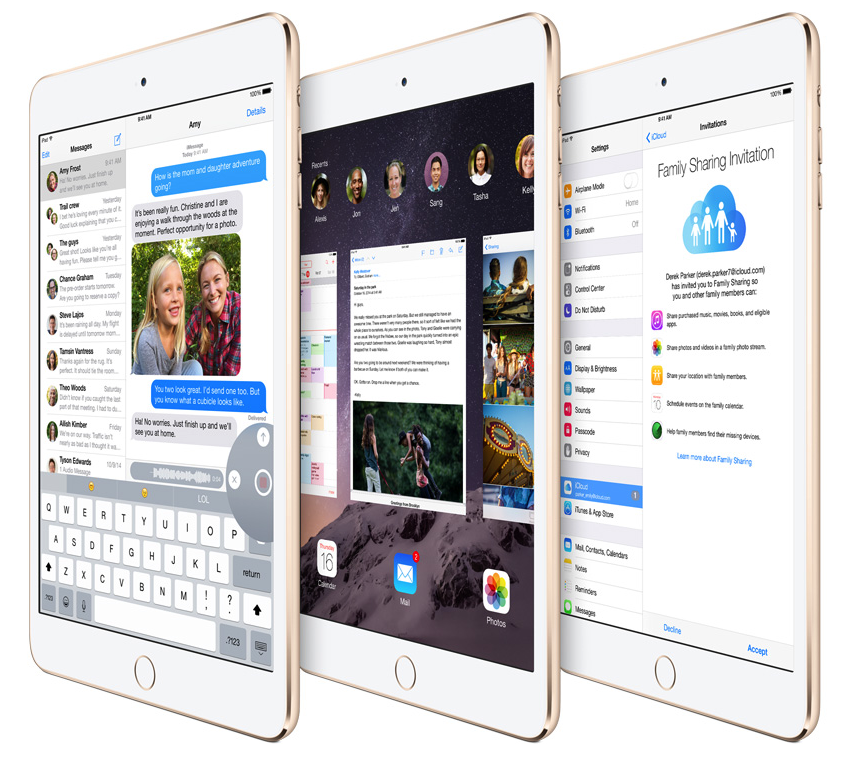 The leaks are going to end about the new iPads because Apple has just unveiled the new iPads at it’s Apple Event. As the rumors claimed we got the iPad Mini 3 & iPad Air 2.

The new iPad mini 3 retains the shape and form of its predecessor, as it’s still the most premium small tablet on the market. The iPad Mini 3 is still Made out of metal and it feels great in the hand. The 7.9″ iPad Mini comes with a Retina Display with 2048 x 1536 pixels, returning in a PPI of 324. The iPad Mini 3 has a Touch ID Fingerprint scanner, which is one of the Major Improvements. This will give it all the great features that comes with Touch ID. We expected the new iPads to be shipping with a souped-up version of the A8 processor that is in the iPhone 6 and 6 Plus. Surprisingly, only the iPad Air 2 got the latest A8X, while the mini 3 has kept its 64-bit A7 processor.

The iPad Mini 3 still comes with a 5 MP iSight camera, and a 1.2-megapixel front shooter for selfies. It again misses on the Great Optics of the iPad Air 2.

Battery wise, we will get around 10 hours of battery , which is plenty.

Pricing wise, Apple hasn’t changed it this time around. The iPad mini 3 starts off at $399 for the Wi-Fi versions, and blasts off from there, in $100 increments, depending on the 64 GB or 128 GB storage amounts. The options with cellular connectivity are $529, $629, and $729, respectively. As before, the mini 3 supports 14 LTE bands. The iPad Mini 3 is available in Space Gray, Silver and Gold. The new iPads will appear on store shelves on the next Friday, October 24th, with pre-orders beginning tomorrow, October 17th.