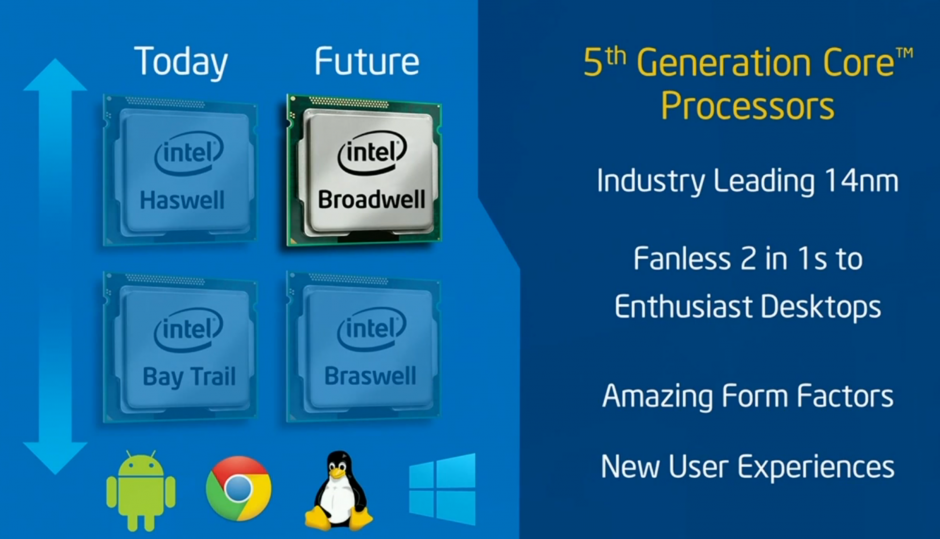 If you recall, last year intel released the Core M branded processors which were made mostly for 2 in 1 devices like Hydrid Tablet PCs.

Today, Intel is adding 14 new processors under the Core i3, i5, and i7 designations while also expanding its Pentium and Celeron ranges with new models. This is the first time in the company’s history that it’s refreshing every segment of its consumer CPU lineup at the same time.

The new processors have a total of 1.3 Billion Transistors according to Intel. Graphics has improved quite a lot & The new Processors can also handle Intel’s WiDi wireless streaming option in 4K, which is Awesome. The new Asus Transformer Book Chi and the Samsung Ativ Book 9 will be powered by the Broadwell Processors and it will be previewed during CES.

Intel expects to see a lot of Tablets, Laptops, Hybrid 2 in 1, Convertibles and a number of power-sipping desktop PCs with Broadwell inside to start making their way into retail channels very soon.

Intel has been shipping its 5th Generation Core Processors out to its hardware partners in the past few weeks and are ready to finally release their long-promised next-gen machines. This confirms that we will see more and more awesome Broadwell powered devices at CES 2015. Stay tuned to Andro Dollar to learn all about the latest from CES.

Are you hungry for a new 5th Generation Core Series Processor? Let me know in the comments section below, and Share this with your friends to let them know about the latest from Intel.