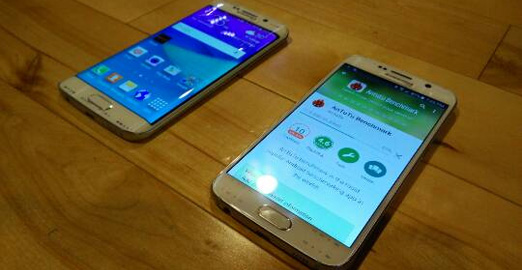 The unveiling day of the Galaxy S6 is drawing close, and now we have got some Alleged Live Photos that claims to be of the upcoming Galaxy S6 by Samsung. At this point we know that there will be 2 variants of the device, one normal and the other with curved edge displays.

Have a look at the leaked images below first of all,

The photos reveal Samsung’s new design language, where the device is made out of metal, and glass is there in the front and back. Overall, the device looks pretty good. It is now certain that the back cover won’t be removable, but since the design is spectacular, that won’t be an issue for some.

Like we mentioned before, the camera will be protruding on the Galaxy S6 and it will retain the heart rate sensor on its right side along with the flasher.

The SIM card slot of the smartphone is located on its right side, below the power/lock key. The 3.5mm audio jack has been moved to the bottom. On the top of the device, we see an IR blaster, microphone pinhole, and antenna strips.

For some reason, there doesn’t seem to be a MicroSD Card slot in the device that was leaked, but hopefully Samsung will implement this as it is one of the most important features.

Stay tuned to Andro Dollar for the Live Stream of the Event on the 1st of March.