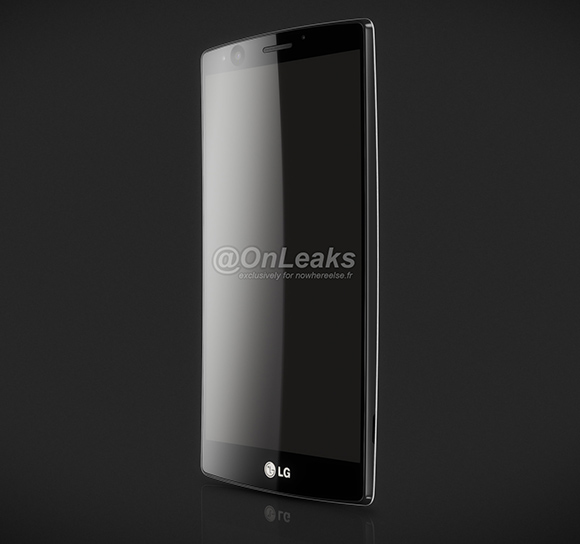 The LG G4 is going to be launched this year by LG and today we have got some hot renders of the device leaked as well as some Accessories being shown off. These images were leaked by OnLeaks. At first glance, the device looks more like the LG G Flex 2 rather than the LG G3.

The LG G4 appears to be slightly curved from the back and not that much from the side. The front of the phone shows a full top to bottom glass solution, just like we see on the LG G3. According to the leaker, the device will also feature a Wide Angle Front Facing Camera. Aaccording to the source, The LG G4 would measure approximately 148.9mm tall and 76.5mm wide to a maximum thickness of 9.9mm.

At the Back, we can see a slightly tweaked design for the the power key and camera button. The camera lens rim is also noticeably bigger, coupled with dual-LED Flash. The Camera used could be either a 16MP one or a 20MP one. At this point, The rumors point that the LG G4 will include a Qualcomm Snapdragon 810 SoC, 3GB of Ram & 5.3-5.7″ QHD display. These images are early stage press renders, so the actual product might look different when it launches.

We also got to see some images of Covers, Check them out below.

Stay tuned to Andro Dollar for all the latest leaks on the LG G4, and Share this with your friends who are in Love with LG.