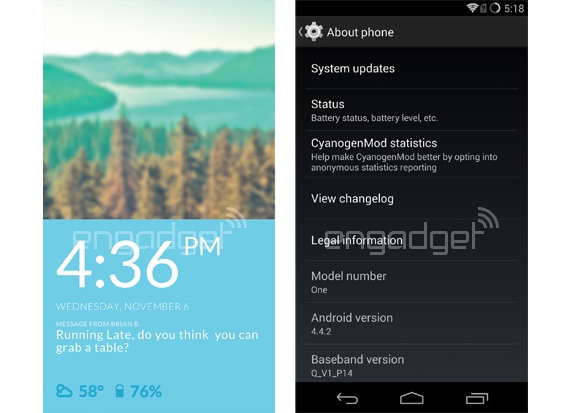 We know that the OnePlus One smartphone will be launched running a custom version of CyanogenMod OS. It turns out that this is called CyanogenMod 11S, and it looks quite different from the CyanogenMod 11 that’s been available since November last year.

Engadget has received two screenshots of the OnePlus One’s OS, which confirms that this is based on Android 4.4.2 KitKat. The image on the left shows the lock screen, which displays weather information, messages, and battery status, among other things. The screen looks fresh and quite elegant. Unfortunately, that’s all that we can see from CyanogenMod 11S at the moment.

We know that the OnePlus one is going to be awesome not only because of the specs but the price as well. This is going to go on sale for around $400 in the US, which is pretty Good.

The OnePlus One will be officially revealed on April 23 and It will come with a 5.5-inch 1080p display, a 13MP rear camera, a quad-core Qualcomm Snapdragon 801 processor, and a 3,100 mAh battery.

Are you waiting for this ? Let us know down below.