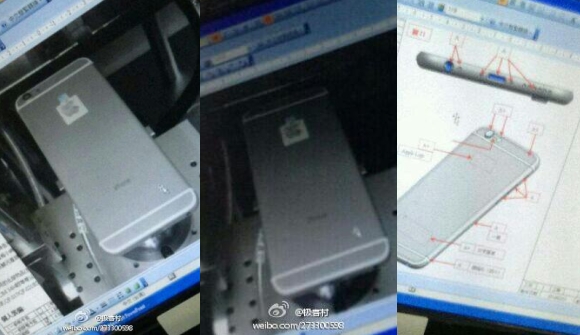 So the iPhone 6 leaks have Official begun coming in (Yes we saw other leaks before but seemed fake to me). Photos of what’s said to be the iPhone 6′s rear casing have appeared online, apparently leaked by a source inside Foxconn.

These images were posted on Chinese microblogging website Weibo. Apparently they depict the iPhone 6 under development at Foxconn, which happens to be one of the biggest contract manufacturers producing the iPhone for Apple. Foxconn has been a partner for a long, long time and its expected to handle most of the orders for new iPhones as well. In the past as well there have been many similar leaks believed to have originated from within Foxconn.

The purported casing seen in the images appears to have a slim chassis, a protruding camera lens as well as rounded corners. It also appears to be taller than the existing iPhone 5S, which wouldn’t come as a surprise, given that the iPhone 6 is expected to tout a 5.5-inch display, which may make it potentially wider than the current flagship as well. All these attributes seem to be in line with all recent rumors about the iPhone 6′s design. Rumor has it that two new iPhones will be launched this year, with 4.7 and 5.5-inch displays. Rumour also has it that the handset’s camera will be an 8 MP f/1.8 unit.

There’s also the possibility that these images might be showing off a fake or a knock-off. Chinese companies are notorious for manufacturing knock-offs and clones, even when a device hasn’t officially been unveiled. We’ll have to wait and see if similar leaks in the future carry the same attributes. We will keep you posted to stay tuned to Andro Dollar.