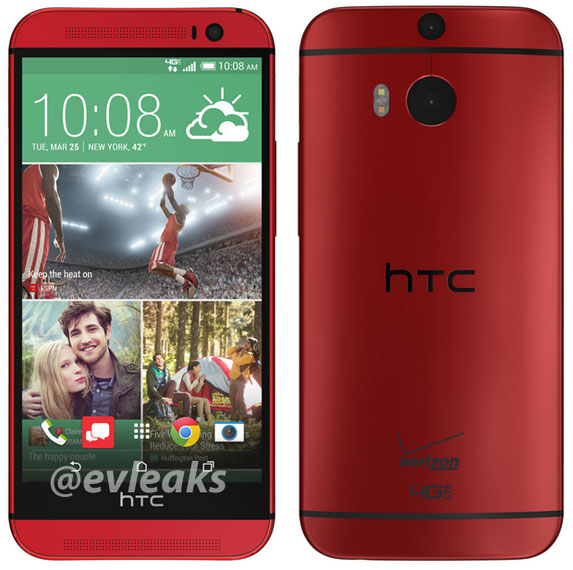 The HTC One (M8) is now available for purchase, and it is available in Gray, Silver and Gold colours. A rumour from earlier this month claimed that Verizon would be getting a special edition of the One M8 in red, and tonight we get what might be our first look at the handset leaked by @evleaks.

Pocketnow make some interesting points about this leaks and makes us double thing whether this is official render or a fan made render. This is what they pointed out,

For instance, on all the official One M8 renders, the LEDs in the dual-tone flash appear round, not square, and the Fresnel lens in front of them is much more pronounced. And while there’s the barest hint of the rear mic hole when we blow up this image, it’s not quite in the right spot, showing up too far to the left. Finally, the plastic bands striping across the phone’s back are ever-so-slightly curved in this render (adding to the illusion of depth), while on the official shots for the other colours, they’re perfectly straight. All that adds up to making us wonder if this might just be a fan render.”

We will have to wait and see whether this is the real deal or not. From the looks of it, the device looks gorgeous as always. What do you think about this New Render? Real or Fake? Let us know down below in the comments section.