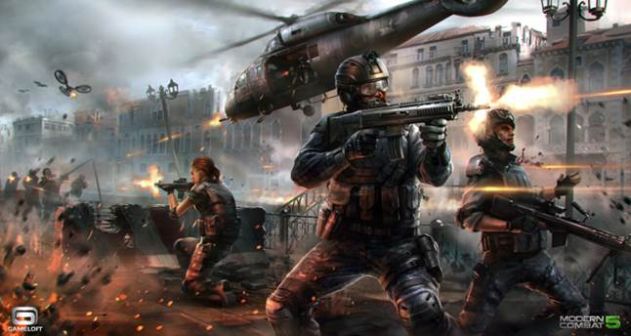 Modern Combat 4 is one of the most popular Graphic Intensive games of Android. Now Details about Gameloft’s delayed First Person Shooter game, Modern Combat 5 have come out and we finally get to know it’s name.

It is said to be called Modern Combat : Blackout. This news came through the gaming site TouchArcade. According to them, The game begins in Venice, Italy, where main character Phoenix must stop a group of well-armed terrorists from transporting weapons of mass destruction. From here, the game recalls previous Modern Combat titles by whisking you around the globe in various missions filled with spectacular set pieces including helicopter and speedboat-based moments alongside the expected twists and intrigue.

Modern Combat: Blackout is confirmed for tablets and smartphones on Android and iOS platforms, although pricing info or an exact release date have yet to be announced. However we guess it willbe the usual $6.99. The game was previously postponed from 2013 to 2014 to let developers “fully achieve” their vision for the title.

At E3 2013, Gameloft showed off some parts in this game, check it out below.

We’ll keep you updated with the latest on this game, so stay tuned and let your Friends know whats coming soon by hitting that share buttons.