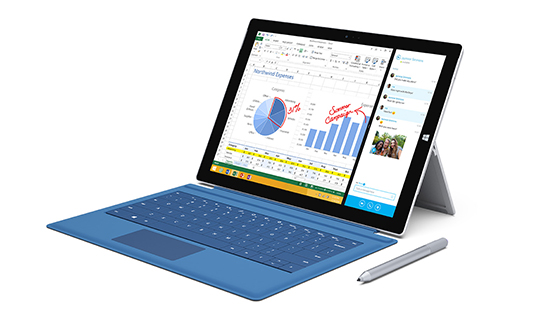 Microsoft Launches the Surface Pro 3; Is this the Laptop Killer?

We knew Microsoft was working on the Surface Pro 3, and they held a Event in New York today to unveil the all new Surface Pro 3. The Surface Pro 3 looks similar to it’s predecessors but it’s much more light, slim and has an improved kickstand. Microsoft’s Surface chief Panos Panay says it’s designed to remove the conflict of buying a laptop or a tablet.

If you missed the event, The verge has made a shorter version of the event of 6 Minutes, so you can check it out below, just to get a glimpse of what happened. The weight of the original Surface Pro tablets was a big drawback, and it appears Microsoft has really focused on removing the weight this time around. Panay used Apple’s MacBook Air to compare the popular laptop with the new Surface Pro 3 on stage at Microsoft’s event and the Surface just killed the Macbook Air. Checkout the picture below which I grabbed from CNET. Checkout the video extracted by CNET of the Event where Panay explains the exterior of the Surface Pro 3.

As I mentioned earlier, the new Kickstand is even better. The new kickstand now supports a “canvas mode” that places the Surface Pro 3 in a 150 degrees angle, designed primarily for inking according to Panay. The multiple kickstand angles might also help with using the device in your lap as a tablet or laptop as Microsoft has created a new Type Cover that magnetically seals itself to the screen to provide more sturdiness. The kickstand will support multiple positions, and the Type Cover adapts appropriately at an angle to balance the device out in your lap. It maybe a small change, but a welcome addition. Microsoft has worked on improving the Trackpad of the Typecover, and has made it larger.

Microsoft said that they are working with Adobe and other companies to make touch optimized versions of software, such as Photoshop which was demonstrated during the event. Microsoft is also using N-trig’s integrated pen and touch technology in the Surface Pro 3 instead of the Wacom digitizer it used in the original Surface Pro tablets. Surface Pro 3 users will be able to sync notes that are made on documents, and they can also be shared in real-time with other Windows users. The stylus has been redesigned so that you can click the top of it to launch OneNote, even when the Surface Pro 3 is powered off. When you write notes using OneNote you can then click the top of the stylus again, just like a normal pen, and it will sync those notes up to the cloud instantly so they’re available elsewhere. OneNote will also bring in content from the web when you tap on the stylus, allowing you to turn anything into a note. It appears to be one of the main new advantages of the updated stylus and the Surface Pro 3. All these features sound so interesting and we would love to get our hands on a Surface 3 soon, to leave you our thoughts. The rest of the tablet’s key features include a duo of 5MP cameras capable of capturing 1080p video, front-facing stereo speakers (Which is supposed to be very good according to what we saw during the event), as well as a host of connectivity ports. The latter include full-size USB 3.0, Mini Display port, and microSD card. Microsoft will start accepting pre-orders on the Surface Pro 3 tomorrow starting at $799, but it won’t be available in all configurations immediately. The versions that will be available are,

Checkout this promotional video, that was released by Microsoft a few Minutes ago.

You can also checkout the Hands on Video of the device by The Verge below.

We would love to hear your thoughts on the newly introduced Surface Pro 3 in the comments section below; Also don’t forget to share the Great news with your Friends.