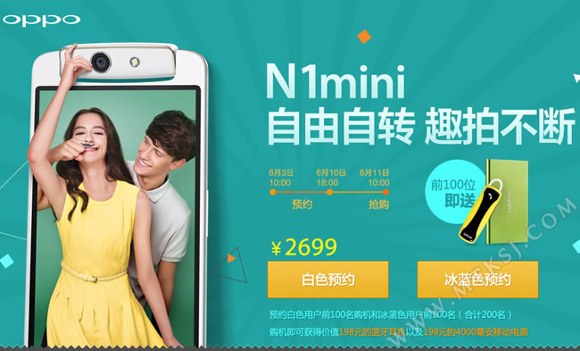 Oppo N1 Mini goes official, not really a “Mini” though

The ruling trend among all smartphone manufacturers these days is to release mini versions of their flagship models, and Oppo has followed suit with the N1 Mini. Typically these mini versions carry a 4.5 or smaller inch screen.

The Oppo N1 Mini however has a 5 inch 720p display which dwarfs most phones in this range, the Mini seems to address one of the biggest problems in the N1 which is its size. With a 5.9-inch Full HD display and weighing a whopping 213 grams, the N1 is a behemoth, even among its peers, and the swiveling camera at the top  adds to the phone’s footprint..

The swiveling camera which was the the biggest selling point of the N1 has made a comeback in the Mini. You get the same great 13MP Sony Exmor sensor coupled with a six-part lens with f/2.0 aperture, there is however no front facing camera but with the swiveling camera that really isn’t much of a bother

Oppo has made the N1 Mini official in China today, the N1 mini is rumored to feature either a MediaTek MT6592 or an Exynos 5422 SoC. We say “rumored” because Oppo has only revealed some specs on the N1 mini’s product page, more details are expected to appear by June 10th.Other specifications include LTE connectivity, a 2140 mAh battery, and the presence of the KitKat-based Color OS 1.4.

We know that the N1 mini will be offered in several color options according to some leaked product shots, including the very nice looking yellow option from the image above. As for the phone’s size, Oppo has only revealed for now that it would weigh 151 grams, a significant reduction over the 213 grams of the N1.