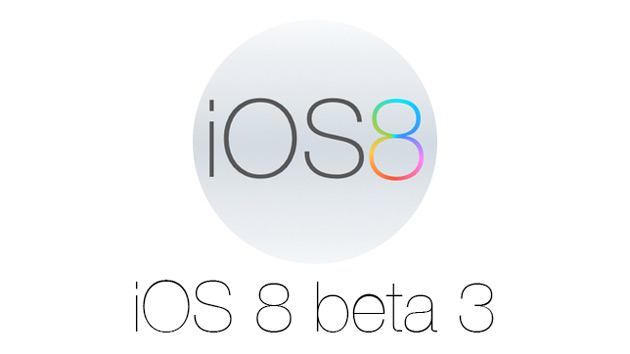 Apple’s first iOS 8 beta was released on June 2nd and the second one came just as expected two weeks later. Now, Apple has released a much-needed third beta of iOS 8 to the public. iOS 8 beta 3 brings with it a number of bug fixes and various new items as well.

You will see a Software Update to install iOS 8 Beta 3 if you’re a Developer. If you don’t have a developer account and if you’re still on iOS 7, you can Follow my Tutorial on How to install iOS 8. That method is the safest method. Obviously since this is pre-release software, bugs are to be expected, but it will be more usable with current applications that aren’t optimized for iOS 8 than the original beta. Give it a try. Handoff – There’s a new Handoff setting in the General menu of the Settings app that allows users to toggle Handoff on and off. Handoff allows users to seamlessly transfer tasks between iOS and OS X.

Photos – In the Photos app, Shared Photo Streams have been renamed Shared Albums. Events and albums from Aperture are now available again in the Photos app as well.

Messages – In the Settings menu for Messages, there’s a new option to automatically keep audio and video messages. Normally, these messages are deleted after a short period of time to save space.

Weather – Some minor changes have been made to the way information is displayed within the Weather app. Wallpapers – iOS 8 beta 3 includes new wallpaper options in solid and gradient colors.

QuickType Keyboard – There’s a new option in the Keyboards section of the General menu in the Settings app that lets users toggle QuickType on and off.

App Analytics – After installing the beta, there’s a new option to opt into App Analytics. Users can choose to share crash data with app developers along with statistics about how apps are used.