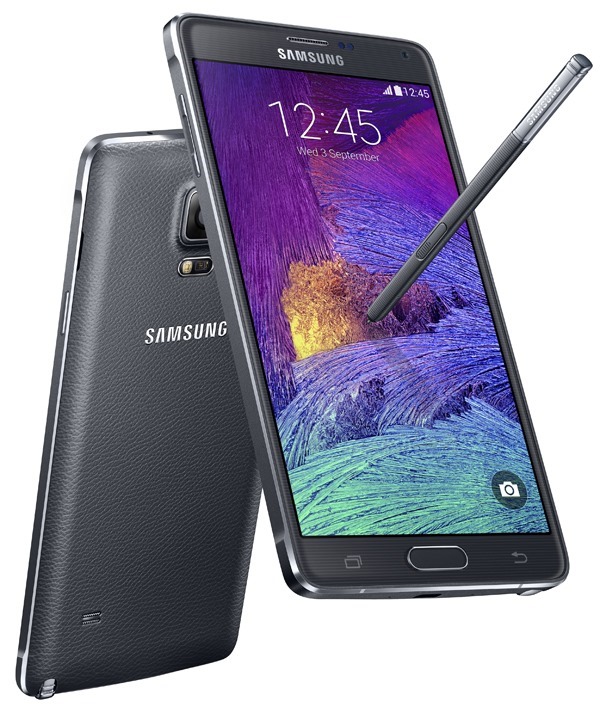 Samsung unveils the Galaxy Note 4; Here’s Everything you need to know

The Wait is finally over. Samsung made the Galaxy Note 4 official at a Press Event at IFA 2014, and we covered it Live with a Live Stream and Live Blog. Samsung released 2 Note devices. One is the Regular Note 4 and the other is the Galaxy Note Edge; A device with a Wrap around curved display. The Note Line has always been the True Flagship line for Samsung, as most of you may already agree. The Galaxy Note 4 doesn’t disappoint in that regard. The Samsung Galaxy Note 4 looks to be a worthy successor to the legendary phablet family. Let’s go In-depth with the Specs now, Shall we?

Checkout the Offical Trailer of the Device First.

The Galaxy Note 4 is the First Note to not get a Screen Bump; So the Display Size remains at 5.7″. The device has got a upgraded display panel, and it sports a QHD (2560 x 1440) Display. The device is having 80% more pixels according to Samsung; All thanks to its new resolution pushing the pixel density from 386ppi on the Note 3 to 515ppi on the Note 4. The Galaxy Note 4 is covered by 2.5D Gorilla Glass 3. This makes the edge of the Glass Smother giving it a good feel. The design is absolutely Superb because it has the Best of Both worlds. Metal for the ones who want a Premium Look and Plastic for the One’s that Enjoy having a Removable Back. Talking about the Back of the device, the Back is completely removable, and it has a Longer Battery this time around. The back houses the Micro Sim and the Micro SD Card (Which can hold up to 128GB). The device is also Not Water-Resistant, Which might make some people sad & Disappointed. With the Galaxy Note 4, Samsung has re-positioned the Speaker to the Back of the device and they have Swapped the USB 3.0 Port to a USB 2.0 Port.

The Phablet has Wifi 802.11 a/b/g/n/ac, along with Bluetooth 4.1, NFC and a IR Blaster on top. The Note 4 also packs a swathe of sensors including accelerometer, proximity, barometer, UV Light Sensor, and a Heart-rate sensor. A Finger Print Scanner is also built in to the Galaxy Note 4. There’s No Galaxy Note, without the S-Pen, so The Galaxy Note 4 will sport a redesigned S-Pen stylus that offers better grip this time around. The Pressure Sensitivity is also Doubled. The Software that is built in to the device helps out more in getting the work done, by having some really cool and Innovative features especially when it comes to the Multitasking experience, that you will not find on any other Device. Multi-window is going main stream with the Note 4 and there will be a dedicated Multi Window button on the Recent Apps Sections, so the user can easily jump in to Multi Window Mode. Air Command has also been improved, and it has 4 Options this time around; Action Memo, Snap Select, Image Clip & Screen Write.

It also has a new Snap Note app that will turn photos of printed documents into editable text, which works great from what we have seen so far. The S-Pen will now also work a bit alike to your computer mouse. For example, if you go into the Note 4’s gallery, you’ll be able to select multiple photos by clicking and dragging over an area or select text inside the browser from multiple spots easily by using the S-Pen. Samsung has also improved its S-Note app, so now you can snap a picture with your camera and edit it afterward, even if the picture you snapped is titled. The camera department has been upgraded and the main camera now sports a 16MP ISOCELL sensor with Smart OIS (Optical Image Stabilization). The ‘Smart’ part is due to the fact that the camera combines both Optical and Digital stabilization to lower processing time. This should allow the Galaxy Note 4 to get some stellar images, even in Low Light Thanks to Smart OIS. Images should be less glittery as well.

The Front Facing camera has a 3.7MP sensor and a fast f/1.9 aperture. It will have some new Selfie Modes available and the Heart Rate Sensor will act as a Shutter Button. The Front Camera is also capable of taking 120 degree wide-angle shots and the software has a Mode called Wide Selfie (Kind of like Panorama) that takes use of the Wide Screen Mode.

The phablet will run Android 4.4 KitKat with the all new TouchWiz on top. The Device has some new features up it’s sleeve. The Settings pannel has seen some colour changing and re-ordering and there’s a Brand New Transparent Clock & Weather Widget. More Improvements have done to make the device perform even better & Snappier. Download Booster is also available just like it did on the Galaxy S5.

This time around The Samsung Galaxy Note 4 features three microphones for noise suppression that is so advanced that a special app can silence selected sources of noise from an audio recording. There are different modes of it that can be enabled under the recording app.

The Monstrous Galaxy Note 4 is Powered by a 3,220mAh battery and Qi Wireless Charging is Available (Though it is Optional). According to Samsung, Users should see 7.5% increase in battery life even though the device has a QHD Display. That’s Awesome News, because the Note 3 lasted quite a lot.

The Galaxy Note 4 also has Fast Charging Built in, Just like the Oppo Find 7 did. With the New fast charging, users should be able to go from 0% to 50% battery charge in 30 minutes. According to Samsung, the Galaxy Note 3 took around 55 Minutes to charge to that level. The device will also feature the Ultra Power Saving Mode that was introduced in the Galaxy S5. The Galaxy Note 4 will be available in October. The pricing isn’t announced just yet, but we think it will be around the Same Price the Note 3/S5 Started selling; So around $750 Unlocked and $299 with a 2 Year Contract in the US.