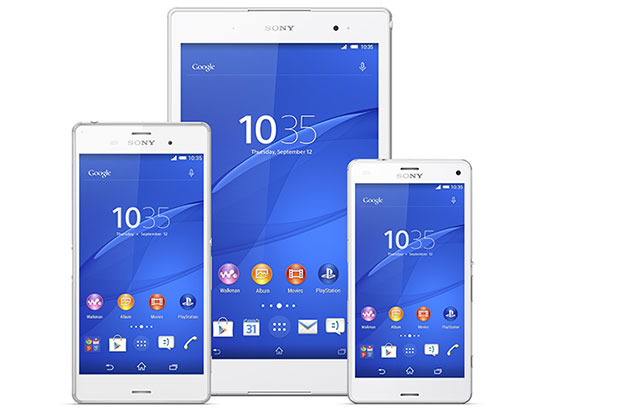 Sony has a trend to unveil 2 Flagship devices per year. We got the Z1 last year at IFA and at MWC they Launched the Z2. Now we get the Z3 and a bunch of more goodness, that comes in the form of the Z3 Compact and the Z3 Tablet Compact. All three devices pack Similar Specs, but the Sizes differ. Let’s see what each has to offer.

The all new Xperia Z3 has a 5.2″ 1080p screen, A quad-core Snapdragon 801 processor, 3GB of RAM, A 3,100mAh Battery and a familiar 20-megapixel camera sensor that has now been boosted to reach an unprecedented 12,800 ISO sensitivity. The lens has been made wider, with the new 25mm-equivalent field of view capturing more of the scene around you, and there’s improved image stabilization for video, and Yes you can record in 4K resolution. The Xperia Z3 has an Aluminum frame around the device with glass in front and back. Sony has also included dual speakers in the front of the device. Sony says that the Z3 will last a full two days on a single charge. As a comparison, the company rates its older Z2 at 1.4 days and the Z1 at 1.2 days using the same metric. We Highly Doubt that after seeing the performances on those two devices, but let’s put it to the test when we get a device.

Two new colors are being introduced for the Z3, with a classy bronze and a silver-gray complementing the standard all-black option. The device is rated for IP68 water and dust protection. Sony’s not doing anything crazy with the software, which remains pretty much unchanged from its current Android skin, though it is adding high-res audio support and a new option to stream video live to YouTube. The Xperia Z3 will launch globally later this autumn and is anticipated for an October release in the UK. The Z3 Compact has a 4.6″ Screen and the Z3 Tablet Compact has a 8″ Screen. They share the same basic design of the Z3 (with minor changes) and have the same IP68 water and dust protection rating. They are also slim, attractive devices.

The 8-inch Z3 Tablet Compact has slightly higher resolution than the Z3 with 1920 x 1200, though its most impressive feature is a thickness of a mere 6.4mm. Like the 10-inch Xperia Z2 Tablet before it, it’s feather-light in the hand and ranks right alongside Apple’s iPad in terms of industrial design. But Sony has still not solved its issues, so It’s just tough to recommend it without more Software Implementation that will take use of the size of the device. Sony unveiled a Good and Exciting thing for Gamers today, and that is PS4 Remote Play. The company’s rolling out this feature, currently available only on the PS Vita, to its Xperia devices starting with the Z3 family in November. That means that you’ll be able to play games running on your PS4 directly on the Z3 Tablet Compact, whose size is well suited to making portable the big-screen visuals that console games are designed to deliver. Remember that you need to have a PS4 for this to work. So what do you think about the New Z3 Family? Drop a comment down below and Share the News with your friends.