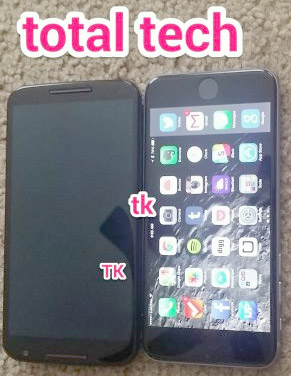 The Motorola “Shamu” aka Nexus 6 Leaked in a Full Press Render yesterday, and we know what to expect. It was mentioned in the rumors that the Nexus 6 will Debut with the Nexus 9 later today. Now just a few hours before it’s launch, the Motorola made Google Nexus 6 has been leaked in a photo being compared to an iPhone 6 Plus.

We can clearly see just how large the Nexus 6 is compared to the 5.5″ iPhone 6 Plus. The Motorola-made phone is slightly taller and wider, but it has a 5.9″ QHD display and front-facing speakers to show for it.

The phone also made an appearance in CPU-Z earlier, which confirmed its rumored specs. We are Expecting to see a Qualcomm Snapdragon 805 chipset with a 2.65GHz quad-core Krait 450 CPU and 3GB of RAM. We are also expecting to see a 13MP camera with OIS With dual LED Flash, just like on the Moto X (2014).

The Nexus 6 will run the latest Android L-release. Google has heavily teased the Name for the Android “L” release, and we saw a picture with a Lollipop Debug icon leak earlier today, which hints at “L” Being Lollipop.

The Nexus 6 also leaked in an AT&T listing today, which showed it’s US Contract pricing to be $49.99. As Reported earlier, we are expecting to see both the Nexus 6 and Nexus 9 later today. Stay tuned to Andro Dollar for the latest.

UPDATE : We have heard that TK Tech News has Photoshopped an iPhone 6 to look like an iPhone 6 Plus, while using a Moto X (2014) next to it to show that it’s real. Thanks to the Commenter, BenG for pointing it out.