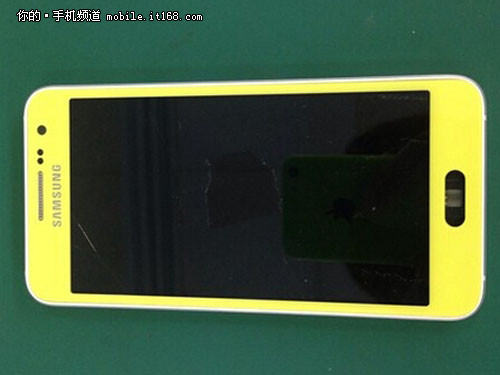 The Galaxy S6, which has a Codename “Project Zero” is slightly building up the hype as we get closer to the expected unveiling in early 2015. Rumors are flowing around, and today we have got the first images of an assembled Galaxy S6 that shows an All Aluminium Unibody with a Colorful Plastic Front.

Most of us are certain that Samsung will use Metal for the body, after Samsung showed great build qulaity on the Galaxy Note 4. However, having a colour in front is a new thing for “S” Series.

This maybe signs that say, Samsung is experimenting, and this may not even be the real deal at the end.

According to the Source this device has the model No. SM-G430. Also, According to the Source, Samsung is still trying to decide between a 5.2” and 5.5” screen size, but the favor is on the 5.5″ Display Size. So we might just see the Galaxy S6 having a 5.5″ Display. We have also heard that it might just feature a 1080p Display and a Snapdragon 801 SoC, which are last year’s specs when you compare, but I think Samsung will go for the QHD Display, and maybe a Snapdragon 810 like one of the previous reports claimed. We are also expecting the Galaxy S6 to have 4GB of Ram and UFS Memory.

This device in the picture might entirely be something else as well, maybe some other Upper Mid-range device (or another variant of the Galaxy S6, which explains the Snapdragon 801 SoC and 1080p Display), So let’s wait and see.

We know that the Galaxy S6 will launch in early 2015, so Are you excited for that? What changes would you like to see and would you upgrade to the Next Big Thing? Let me know in the comments section below.