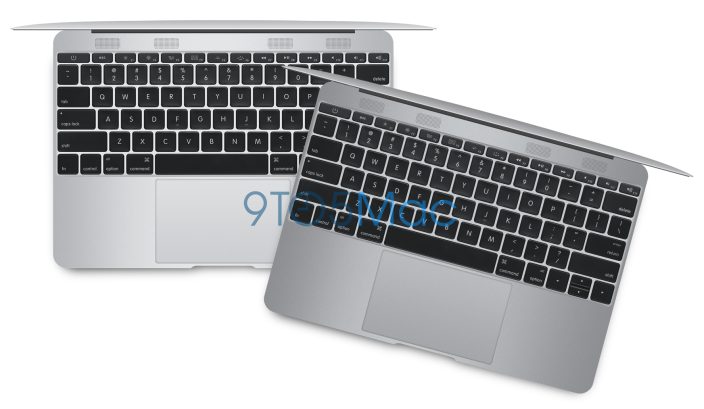 I reported previously that Apple is working on a Redesigned Macbook Air, and it looks like the rumors were right. Today we have got some renderations of the upcoming Macbook Air that shows it all off.

The Images were revealed by 9To5Mac (and are close renders of the what the device will look like as reported and they are not real), and according to them the new 2015 edition of the Macbook Air will have a total revamp. It will have a Thinner bezels and a thinner body overall, it will be lighter, Fanless and it will have a Higher Resolution Display (Retina Maybe?). Sources within Apple, claims that this is the first major step in mobile Mac computing since the Retina MacBook Pro launch in 2012.

The Keyoard, Trackpad and the Speakers have also been revamped in the newer Macbook Air version. The new keyboard sits edge-to-edge across the width of the laptop.The keys are narrower too. In addition to the keyboard, the trackpad has been changed.

The trackpad is approximately the same width as that on the 11-inch MacBook Air according to the Source, but it is apparently slightly taller, nearly touching the bottoms of the keyboard and the frame. As previously rumored, it also appears that the new trackpad does not have the same clicking effect as found on current MacBook models. Above the keyboard are four redesigned speaker grills that actually double as ventilation holes for the Macbook Air to stay cool. The new 12″ Macbook Air will have the amount of ports ever on an Apple computer as shown in the images below. On the left side is a standard headphone jack and dual-microphones for input and noise-canceling. On the right side is solely the new USB Type-C port. According to the report by 9To5Mac, Standard USB ports, The SD Card slot, and even Apple’s own Thunderbolt and MagSafe charging standards on this new notebook will be removed. But they also mentioned that since this is a working prototype, and since Apple is working with a lot of prototypes, we might eventually see these included as well.

9To5Mac also went on to explain the use of ports,

“The new USB Type-C connector is smaller, faster, and more capable than the standard USB 2.0 and 3.0 ports on existing computers. The connector is able to replace the Thunderbolt Display port on the current Apple laptops as USB Type-C actually has the technology to drive displays. Additionally, the latest specifications from the USB foundation indicate that USB Type-C can actually be used to power computers, which makes the standard MagSafe plugs unnecessary on this new device. The connector is also reversible like Lightning on iPads and iPhones, which should make the overall experience a bit more intuitive.”

With Intel releasing the brand new 5th Generation Broadwell chips, Apple will also be using that in the new device along with a SSD to make the experience consistent. We might also see the device running the Latest version of OS X available by then (The version after OS X Yosemite)

We might see the all new Macbook Air in Mid 2015 (Maybe around WWDC). I am waiting for this. Is the feeling mutual? Drop a comment with your thoughts.