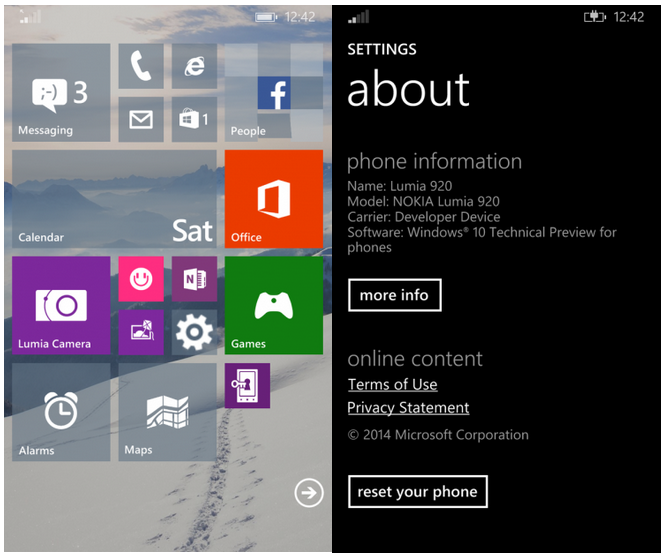 A new hack allows nearly any Windows Phone device to get the Windows 10 Developer Preview; Here’s How!

UPDATE : One user was able to Install the Windows 10 Preview on to a Lumia 520, which has just 512MB Ram, and really low hardware components, and the Update seems to be working fine. The way he got it up and running is by Following the Hack Given below. If it works on the 520, chances are it will work on most of the other devices. Feel free to give it a shot if you are brave enough. On a Side note, Microsoft is selling the Lumia 520 on Ebay for just $29, Yes you heard it right. Just $29. Go get one from here if you want a backup phone.

ORIGINAL ARTICLE : This new hack has been discovered by XDA Senior Member “RustyGrom” and it will allow Windows Phone users to install Windows 10 Developer Preview on nearly any Windows Phone 8.1 device.

The hack tricks the Windows Insider app to think that the device has a Windows 10 Supported model nuber by changing the Phone Manufacturer Model Name in the registry. The Developer has mentioned that there is a very high risk of bricking the device due to this, especially if Microsoft starts delivering firmware via the Insider app.

If you Really, Really, REALLY want Windows 10 Technical preview on your Windows Phone, Then you can follow the Instructions Given on the XDA Thread here. All the necessary Downloads are also given there. I will Quote the Steps given in the thread below. Proceed with Caution.

1. For the Lumia 1520 (and other phones?) reset your phone using the Windows Phone recovery tool. I recommend not logging in and setting everything up yet and just waiting til the end and doing a reset and letting it restore after you’re on Windows 10. This may not be required for your device but most likely is due to the space issue cited by Microsoft. You can see your available space in the About menu of the Windows Insiders app. Before resetting mine was ~200mb and after it was ~600mb. You can try without resetting but may get an error after it tries to download and install the update.

2. Install the Windows Insider app on your phone (you will need to have a store account configured)

3. Open the insiders app and go to the about options in the app bar and screenshot/make notes/email the settings to yourself. You may need this later.

4. Download and extract the WPInsidersHacks app (found here at XDA-Developers) to your computer

5. Start the WPInsiderHacks app on pc, approve any firewall requests

6. Connect to the same WiFi that your PC is on. Edit the settings for the WiFi connection to turn on the Proxy and set it to use the PC’s IP address and enter 8877 for the port

7. Open Internet Explorer on your phone and navigate to http://[pc.ip.add.ress]:8877 where [pc.ip.add.ress] is the IP address of the PC running the WPInsidersHacks app

8. Tap on the link at the bottom to the fiddler root certificate

9. When prompted click open and then install to trust the cert and ok at the confirmation

10. Run the Windows Insider app and tap get preview builds

11. Tap on which custom action you’d like to perform e.g. “Set to ATT Lumia 635″ and click the arrow at the bottom.

12. Accept the agreement and click the check mark at the bottom. the app will close

14. Tap get preview builds and login with your Microsoft account

16. Go into the phone settings and check for updates. With any luck you should have Windows 10 there for you to install.

17. You’ll probably want to go into the settings and do another reset and then log into the phone and let it restore your previous data.”

Before you try, it is advisable to read through the XDA Thread, and see if it has actually worked for your device (As some users have posted the results). Some users have reported that it is indeed working (Like the screenshot given above which shows Windows 10 running on the Lumia 920), and some are reporting it is not.”

If you are Brave enough, and if you are going to try this, let me know in the comments section below. Share this with your Windows Phone Enthusit Friends so that they could think about giving it a shot, and eventually try, Maybe. Stay tuned to Andro Dollar for all the latest from the tech world.

WARNING – Whatever you do with your phone, you do that entirely on your own risk and you have full responsibility for the consequences. The author can’t be responsible for any damages of your phone!