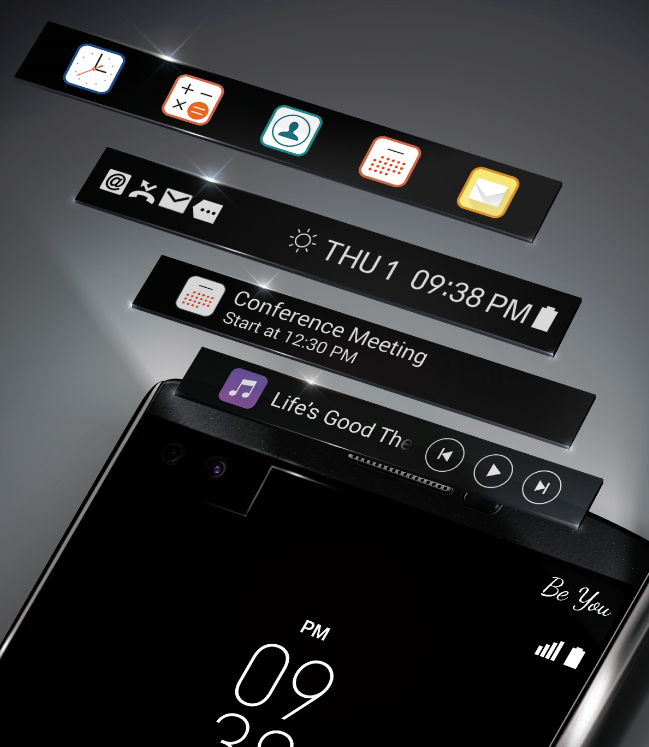 LG has been teasing another Higher end device dubbed the “Super Premium Flagship”, and it has been officially announced as the LG V10. The high-end V10 smartphone from LG comes with secondary display and a duo of front-facing cameras. It’s one good looking device too.

The stainless steel frame of the phone will protect it from bumps and falls. A third party lab found the LG V10 to be “MIL-STD-810G Transit Drop Compliant” which means that it will do well with accidental drops. The Dura Skin covering protects your phone from scratches, while giving you a grippy material to hold on to.

The LG V10 also is equipped with dual 5MP front-facing cameras that allow you to snap a 120 degree wide angle selfie. LG uses a special algorithm to combine the images from the two lens, giving you the wide angle look without having to pan the camera from side to side. Using Multi-View Recording, you can shoot a video from different vantage points at the same time, using the three cameras on the phone. You can decide later which shot you want to use in the final version of your video. Pretty Cool.

The Rear Camera of the V10 is a 16MP camera with an aperture of f/1.8. OIS 2.0 is also included. It will perform just as well as the LG G4 with Manual modes in photos but the LG V10 also includes a manual mode for video as well. You will be able to control the frame rate, shutter speed, white balance, ISO and focus in videos. Videos can be shot in three resolutions, HD, FHD and UD. The V10 also includes a Quick Video Editor to make some post-production edits, and a Wind-Noise filter for clearer audio.

The LG V10 will be available in Space Black, Luxe White, Modern Beige, Ocean Blue and Opal Blue, and will launch starting in Korea this month. It will also be offered in the United States, China and other markets in Asia, Latin America and the Middle East, with launch dates to be announced later. Pricing has not yet been revealed.

Who’s interested in the LG V10? Impressive package overall, and the device looks great. Don’t forget to Share the Awesome news with your friends.