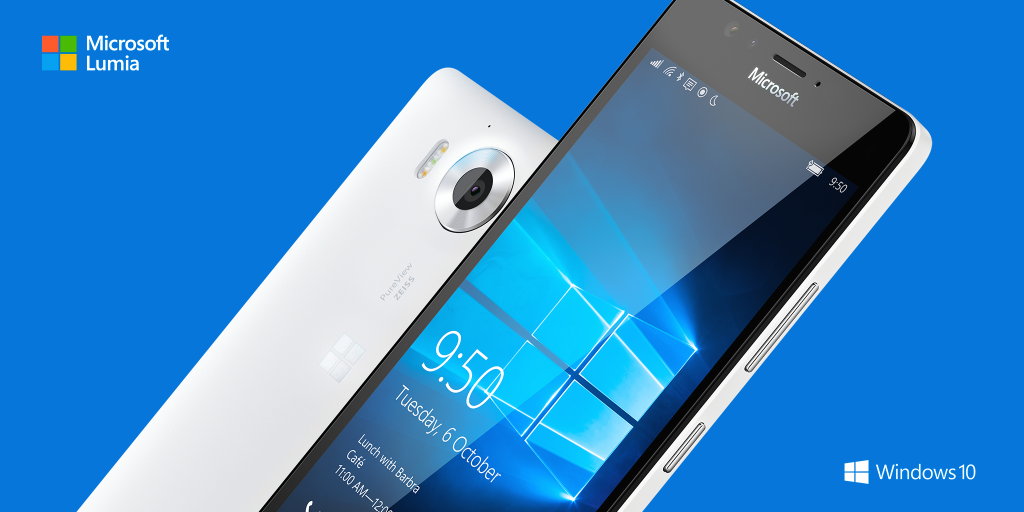 We were waiting for Microsoft to unveil the New Lumia devices for a long time, and today they finally unveiled the latest flagship running Windows 10 named the Lumia 950.

The Lumia 950 comes with a 5.2″ QHD screen. There is also an XL version with a 5.7″ display. The display is an AMOLED display with Glance screen and ClearBlack, except in a more compact body. The phone comes with a 3000mAh battery with a USB Type-C port and wireless charging built in. It also supports fast charging. The camera is a 20MP PureView sensor with 5th gen optical stabilization and Carl Zeiss optics with an aperture of f/1.9. It has 3 flashers. It can record 4K video natively with Lumia’s traditional Hi-Fi audio recording. The Selfie camera is a 5MP camera with 1080p video recording capabilities. There is a new feature baked in to Windows 10 called, Windows Hello. It allows the Lumia 950 to unlock with an infra-red iris scanner located above the screen, on the front. Continuum and other Windows 10 features are also available on the Lumia 950.

The Microsoft Lumia 950 will cost $550. It will be available in November. There’s a dual-SIM version too.

Anyone interested in the new Flagship Lumia? Let me know in the comments below, and share with your friends.