Another alleged photo of HTC M8 makes the rounds on Twitter 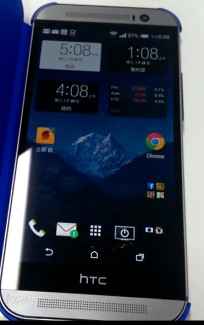 Another alleged live photo of the yet to be announced HTC M8 made the rounds on Twitter. The image shows the device tucked into a protective flip case which looks a lot like the original flip cover for the HTC One.

The purported photo of the HTC M8 is different from the previous leak of the device’s front,which was shot down as fake by an HTC executive.The smartphone in the newly emerged image has an LED notification light between the front-facing camera and the earpiece.

In addition to the notification light, we also get to see the on-screen Android navigation buttons of the flagship. They fall right in line with previous leaks.