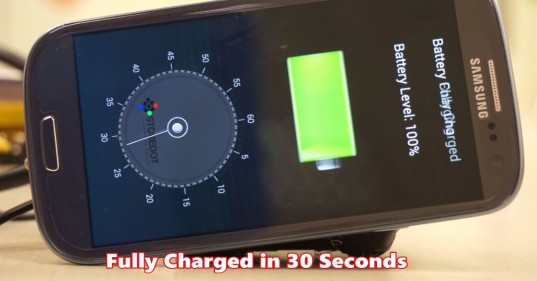 Battery life is that one thing that is not up to par with the rest of the competition. Last year we say a 18 year old girl figure out Super fast changing, but it’s still not main scale and we didn’t see a Fully functional working prototype even. But now StoreDot an Israeli startup company has revealed this amazing breakthrough in Nano-Technology that can charge a mobile phone in 30 Seconds. In the lab environment the phone can operate for about 2 hours in normal usage.

In a recent BBC interview, journalist Rubert Goodwins questioned how much power can translate in such a quick charge. However StoreDot demontrated the first prototype and mentioned that this is an initial prototype and they are working on advancement of the technology.

In this demonstration, they use the Samsung Galaxy S3, and StoreDot says it plans to make chargers for other smartphones, too.

Checkout the Video below and let us know what you think down below.