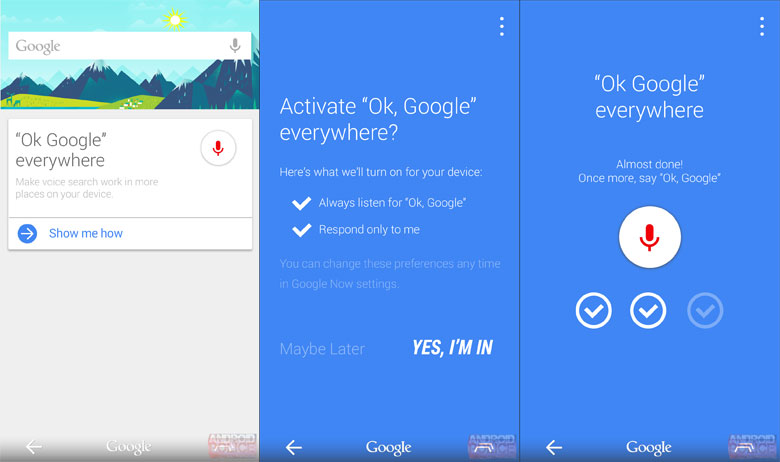 We have been seeing quite a lot of Google rumors in the past few days,pointing towards Google’s Android UI change. From what we have seen so far some of Google’s Apps are going to be flater & is going to feature a minimalistic look. We have also seen people talking about Project Hera – The Bridge between Android, Chrome OS and Search. Today we get a New Rumour saying Google will use “Ok Google Everywhere” and they will change the navigational buttons as well.

Android Police has the evidence suggesting that Google wants to make its “Ok Google” voice command a pervasive part of the Android experience, and rather than being constrained to the home screen or Search app, voice control would work everywhere. Since this would all be new for even users familiar with current voice commands, the service might start prompting the user with a summary of what phrases to speak to perform specific actions. Google may also be looking to change-up the navigation buttons we’re currently familiar with, with the biggest shift being replacing the home button with a Google button – one that would act as a persistent shortcut to search. To get back home, you’d instead have to hit the recent apps button where it is said that it, itself would get a makeover likely tied to that New UI redesign and perform a swipe gesture like on the Image Below. It is also mentioned that the “G” button resembles the UI on Android Wear, making us wonder whether it is also connected to this.

Like with Hera, the details are far from clear. Talk of a modular command system that could let voice prompts mature into something capable of performing complex tasks is fascinating, but so much is unknown at the moment that it’s hard to get a complete sense of Google’s plans. I/O’s just a couple months away, and my guess is we are going to see this there. We can’t wait to see what-else Google has under the turf.