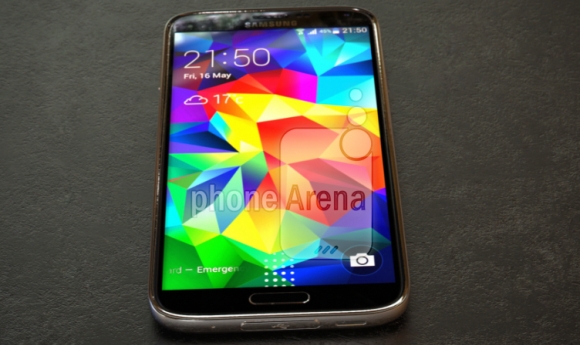 The Galaxy S5 Prime has been in the rumour mill for the longest time now. Alleged live photos of the yet to be announced Samsung Galaxy S5 Prime made the rounds online earlier today. The images shows what’s coming with the prime.

As you see with the pictures above, the Samsung Galaxy S5 Prime looks noticeably more rich than the regular Galaxy S5. Samsung seems to have finally ditched the chromed plastic frame for nice looking matte metal finish. As you see in the pictures, the speaker has also been moved to the bottom, like on the Note 3, which in my opinion is a good thing. The Original S5 had the speaker at the back.

These photos, show off the confirmed 5.2″ QHD Display.It is also said that this device will launch pretty soon. Samsung is holding an event next month, so maybe we will see it there.This device is rumoured to have a Snapdraggon 805 Soc and 3GB of Ram and it is said that this will have a price tag of $880.

Also according to GSMArena, A couple of tweets from Faryaab Sheikh, who has been correct about Samsung related rumours in the past confirm that this is in fact a real. But he further goes on to state that it’s not going to be a member of the Galaxy S line-up, but a lower-standing smartphone, allegedly called Galaxy Alpha.

Checkout his tweets below.

Just got confirmation from a source, the device leaked by @phonearena is real and definitely exists. http://t.co/KQFwMBK3l5

However, the device might not be a member of the Galaxy S family. I’m not 100% sure, but this might actually be the GALAXY Alpha. — Faryaab Sheikh (@Faryaab) May 18, 2014

Two other videos also showed up on the internet earlier today, showing off the Alleged Galaxy S5 Active/ Galaxy S5 Prime (According to the Video). Check them out below. We are not sure about the accuracy of this leak, but it’s another leak, so we wanted to share it with you.

We will anyway have to wait and see when Samsung will release these devices. We may see the Galaxy S5 Active at Samsung’s health event on May 28th. Stay tuned to Andro Dollar, as we will let you know about the latest most important leaks also drop a comment down below, with your thoughts on these leaks. Do you think these are real? What other features would you like to see with the Galaxy S5 Prime and Will you consider getting it?