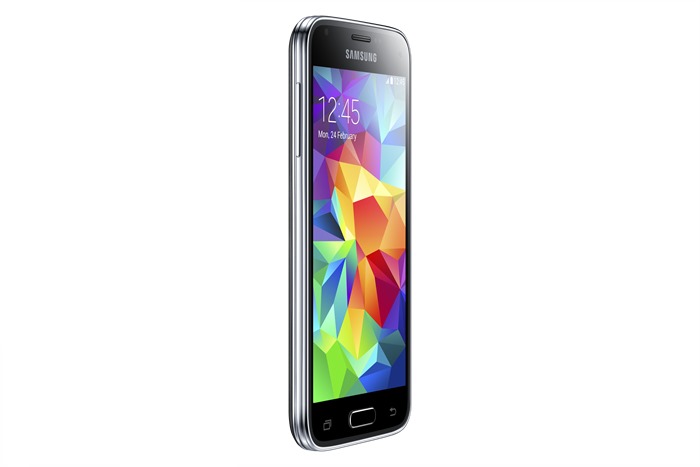 The Samsung Galaxy S5 mini has a 4.5″ Super AMOLED screen with a 720p resolution and a pixel density of 326ppi. The body is IP67 certified meaning it is completely dust tight and can be submerged under up to a meter of water for half an hour. What’s special here is that there’s no flap covering the Micro USB 2.0 port on the bottom, which means Samsung must have managed to integrate a special coating to get it done. This is a step in the right direction.

The back of the S5 Mini is perforated leather and features a heart rate monitor. The Home Button also has the fingerprint scanner just like the regular Galaxy S5. The Galaxy S5 mini packs 4 Cortex-A7 cores @ 1.4GHz, with 1.5GB of RAM. The internal storage is 16GB and there’s also a Micro SD Card slot for expansion. The Battery of the S5 Mini is 2,100mAh. The connectivity was bumped up to 150Mbps LTE and keeps the IR blaster on top.

The Galaxy S5 mini will come out with Android 4.4 KitKat out of the box and it will feature S Health, Private mode, Kids mode and Ultra Power Saving mode just like on the regular Galaxy S5. The camera has been unchanged when compared to the S4 Mini and remains at 8MP with 1080p video recording. The camera features most modes from the regular Galaxy S5, as well as the S Studio editor.

The Samsung Galaxy S5 mini will begin its rollout in Russia early this month in four color options according to Samsung; Charcoal Black, Shimmery White, Electric Blue and Copper Gold. The Pricing hasn’t been announced yet, but there’s a dual-SIM version inbound as well.

Anyone willing to get this over the Regular S5? If so let us know Why, down below in the comments section.