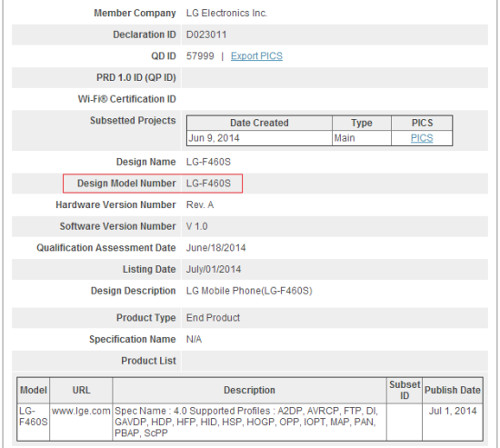 The LG G3 launched not that long ago, and it still isn’t on sale in a lot of countries, but apparently LG is already working on a beefed up version of the smartphone.

The LG F460S has been certified by the Bluetooth SIG today. This could in fact be one of the G3 Prime models headed to LG’s native land of South Korea.

This device may/maynot be called the G3 Prime, but this will sport a Qualcomm Snapdragon 805 chipset, compared to a Snapdragon 801 in the original. An LG F460L has been leaked before. That could be the same device as the F460S, but headed to a different Korean carrier. “L” usually stands for LG U+, while “S” is used to depict phones sold by SK Telecom.

It is highly likely for the Prime edition of the G3 to be launched only in Korea just like the S5 Prime did with LTE-A, QHD Display and Snapdragon 805 Processor.

We will inform you when we hear more news about this device. Stay Tuned. Meanwhile let us know what you think about Smartphone manufactures releasing Prime versions of the devices after launch.