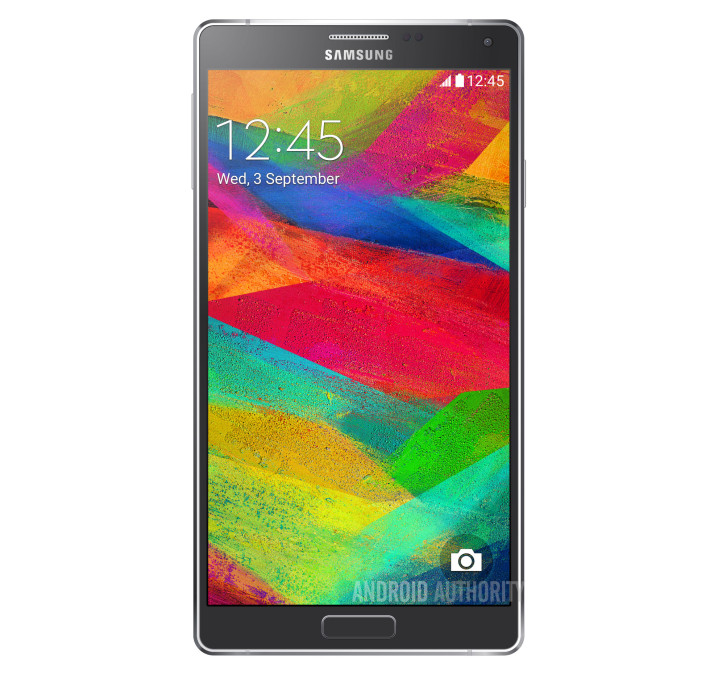 LEAKED : Galaxy Note 4 Render, Poster and Specifications along with a Official Samsung Teaser

The Galaxy Note 4 is super hyped. The device is just days away from the Unveil event on September 3rd, and we have got the First Render of the Device courtesy of Android Authority. An Unknown Source has sent-out the image to them, and that shows the Galaxy Note 4 with the recently Leaked Wallpaper on top. The Newly leaked render matches the previously leaked images but still this may not be the real thing.Anyways this gives us a good look at what could be the Galaxy Note would look like.

We have also spotted a UAProf on Samsung’s mobile site, which confirms a large number of the devices’ specifications. According to this report, the device with the Model Number SM-N920T (Which we assume is the T-Mobile Variant) will have a QHD display at 1440 x 2560px resolution. It also has mentioning of a 64-bit processor which we reported a few weeks back. So could this mean that we are getting a Galaxy Note 4 with the Snapdragon 805 & 810 (64 bit SoC) as well? The other specs given are a 5.7-inch display, S-Pen, and USB 3.0 port alongside the fingerprint sensor and heart rate monitor. The Device will also have a 16MP OIS Camera as we previously reported.

We have also seen a IFA Poster which gives us a look at the Phablet showing a little different design if you look closely. At this point anything is possible. Samsung has also sent out a New Teaser earlier today (They have been sending out teasers all week long), which gives us the first look of the device (Even though nothing is clear other than a black box). If so, the Earlier leaked Images and the Render we reported on earlier maybe false judging by the rounded areas are the edge of the device. Check it out below.

Now that you have seen all of the leaks, What do you think? Drop a comment down below.

We’ll be covering the Note 4 launch live on September 3 with a Live Blog and a Live Stream, so stay tuned for all the coverage of this amazing device.