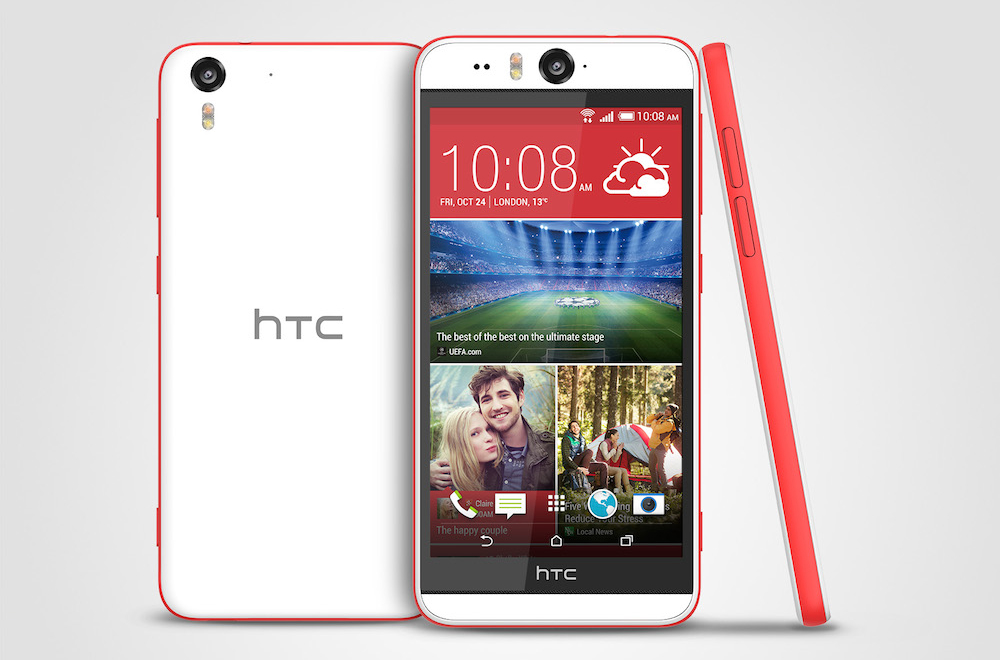 Selfies, that’s what we all Crave. We have seen many Selfie phones this year, but non of them have had Great Cameras; but that is about to change as HTC has unveiled the HTC Desire Eye, a Smartphone with a 13MP Front Facing Camera and a Back Facing Camera. It even has a Dual True Tone Flash on both ends.

The Desire Eyes Front Facing Camera looks much larger than the Front Facing Camera on any other device. Since this is a Selfie Phone, let’s focus more on the Cameras. Both cameras can record 1080p videos at 30fps. The one on the back has an f/2.0 aperture and a 28mm lens, while the one on the front has a wider 20mm lens but a smaller f/2.2 aperture.

HTC’s trademark BoomSound speakers are harder to see but are still on board; Just above and below the display. The Desire Eye has a 5.2″ 1080p LCD Display. One more strong point for the Desire Eye is its IPX7 certification. It makes it water resistant and it can stay inside 1m of water for up to half an hour. It makes the device appeal to a lot more users.

The Desire Eye also carries much better specs than most of the Desire family. It’s powered by a Snapdragon 801 chipset with 2GB RAM and runs Android 4.4 with the latest Sense 6 UI on top. The Desire Eye also has LTE connectivity, dual-band Wi-Fi a/b/g/n/ac, Bluetooth 4.0 with aptX, NFC and a micro USB port. The port is left uncovered while maintaining the IPX7 rating, just like the HTC Butterfly 2. The Desire Eye has 16GB of built-in storage, expandable by microSD cards up to 128GB and a 2,400mAh Li-Po battery.

HTC has custom made two new apps that will take use of the Dual Cameras of the HTC Desire Eye; One is called Eye Experience and the other is called the new Zoe. The HTC Eye Experience app will help you use the two 13MP cameras to the maximum potential. The mode called, Split Capture divides the photo 50/50 between front and back cameras, while Crop-Me-In creates a single photo with you photoshhoped into the back camera image.

The impressive front-facing camera on the Desire Eye also targets high-quality video calls. To make things easier it can track up to four faces and keep them in place so people can relax and not worry about positioning while they chat. This even works with third-party video call apps like Skype, so people who do Video Chatting a lot will be very happy.

HTC Eye Experience will roll out to the following models as well in the future according to HTC.

HTC has also bundled in a new app the new Zoe. The new version offers collaborative video editing and it integrates with the HTC RE Action Camera. Zoe is not completely done even after all this wait, the new content engine will launch later this year, so we might see more improvements in the future.

The New Zoe app will be made available on both iOS and Android. Checkout the Screenshots from both variants below.

The HTC Desire Eye looks so promising. It has Great Specifications, a Great UI, a Waterproof body that matters quite a lot and finally Dual 13MP Cameras that a lot of Selfie Fanatics will enjoy. What’s your take on the HTC Desire Eye? I think if HTC Can Price it well, they have a Killer Phone.