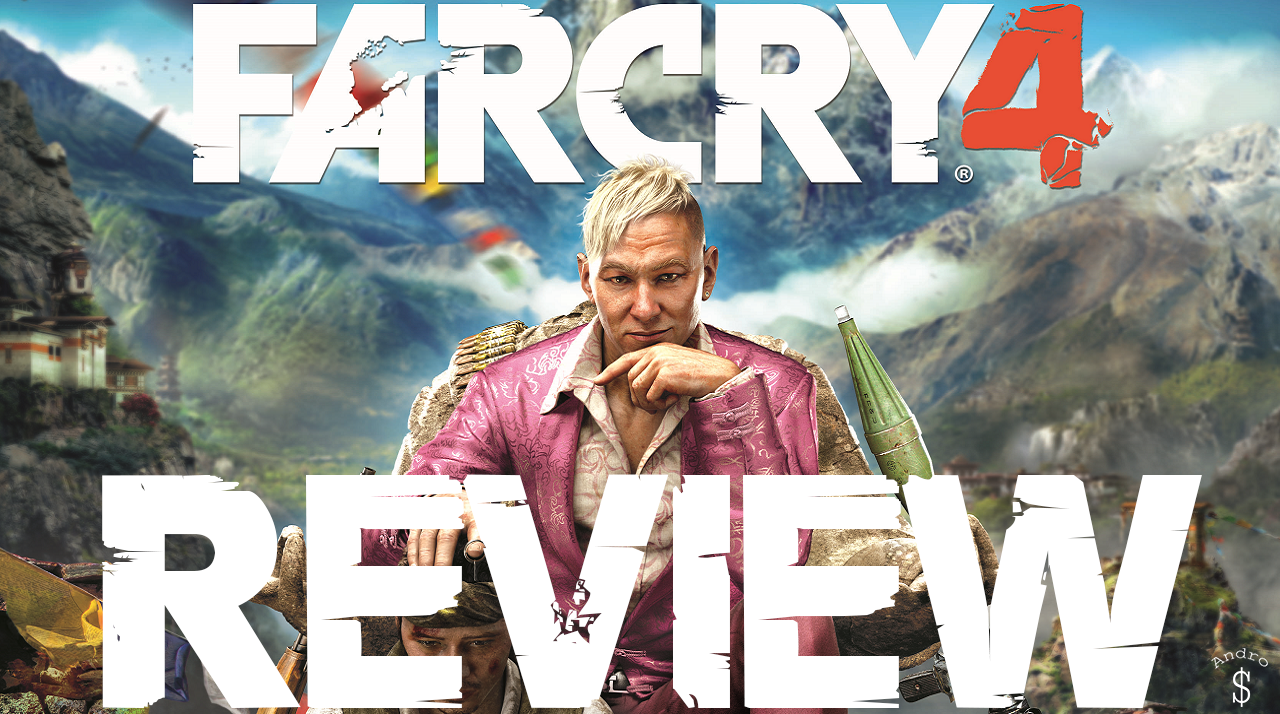 After a lot of anticipation and Hype, Far Cry 4 is finally here. Far Cry is an action packed, adventure based first-person shooter, video game. It is developed by Ubisoft Montreal. This is the first Far Cry game to come out for the Current Generation Systems, the Xbox One and Playstation 4. It is also available for the Xbox 360, Playstation 3 and PC.

Take a look at the Launch Trailer of Far Cry 4,

With Far Cry 3, Ubisoft had a huge shift in how Far Cry plays out as a game. It has a Huge Open world and the game is filled with extra things to do. The possibilities and endless, even after you finish the single player campaign, you can still do a load more just like most of the other Open World Games. This time with Far Cry 4 we have to explore Kyrat (Nepal and The Himalayan Area)

Before I made the review for Far Cry 4, I wanted to play through the game well, like really well like I always do. I have finished the game in both possible ways, the Shortcut method which allows you to finish the game in less than 20 Minutes and also the Full Campeign. The Storyline of Far Cry 4 is based on Ajay Ghale, who is the son of the legendary revolutionary Mohan Ghale. The game begins where Ajay visits Kyrat to carry out the final wish of his mother by scattering her ashes in a place called Lakshmana. Then he meets Pegan Min, and he is rescued by the people of the Golden Path; A group of people who are trying to liberate Kyrat from Pagen Min’s Dictatorship. There are two main characters that are in the Golden Path, Sabal and Amita. Throughout the game, we are asked to pick sides; we can either help Sabal or Amita – They have different motives and ideas. Sabal is a traditionalist and his dream is to take Kyrat back to its glory days, with the traditional statues and heritage. Amita wants improve Kyrat, to make it a better place with schools and hospitals. It’s sometimes interesting to decide and pick missions. This makes it tricky sometimes.

The game looks fantastic. The Graphics are amazing and the Open world of Kyrat looks stunning in every way. The Map of Kyrat is big, and there are many great places to explore. The storyline having cultural places to Open places with more trees to  snowy, Himalayan mountains gave the game more depth. It felt like there really was more to it. In terms of the gameplay, Far Cry 4 has similar features to what we had in Far Cry 3, like the Crafting, Upgrading Skills and other goodies, but this time it feels more polished and well planned out. The Skill of Riding Elephants caught my eye immediately because who wouldn’t like to Ride an Elephant and Destroy some enemies. There are also a lot of Animals to hunt, and we also have a lot of Things and Places to Loot as well. Animals like Egals try to fight us sometimes, and even Rhinos can be seen in the Wild. In the Water we still see Sharks like on Far Cry 3, and it’s a pleasure to try to hunt them down. Guns are also great in Far Cry 4. We have all the important and great guns from the AK47 to the Sniper Rifle, to the Flame Thrower to the Motar Bombs; well you get my point. Not just having great guns, In Far Cry they look and feel great too.

Now coming to the Vehicles, Probably the most important thing in games like this only because the Map is insanely big. New additions like Tuk Tuks (Three Wheelers), and Buzzard Helicopters are absolutely fun to ride. We also have the usual vehicles like Cars, Vans, Quad Bikes, Jet Skis and Boats and they all feel very much a like to what it felt with Far Cry 3. There are Hunters in the game, and Hunters spell animals and make them hunt us. Hunters are equipped with Fire Arrows and sometimes it’s really fun to just mess around with them. Overall the Enemies, the people working for Pegan Min, have different ranks and categories and there are still people running around with Knifes and Molotovs as well. It gets fun as you play along. Another Strong point for Far Cry 4 is capturing Huge Fortresses with Friends in Co-Op mode. By using this, people can Play online with their friends to try to capture Fortresses. There is an option that allows users to Hire men to fight along with you if you are offline, and I found this handy as it was great to have some backup. The new Autodrive feature in Far Cry 4 is also Great as it allows you to Shoot people while driving. Sometimes, it will even draw your aim to nearby enemies, which will make it really simple for you to kill them.

Just like the Good, there are somethings I didn’t like about Far Cry 4, and mainly it’s the fact that it felt a lot alike to Far Cry 3. When playing the game, even though we had loads of new stuff, most of the things from enemies to the environment in some cases felt like it was taken directly from Far Cry 3. This may not be a bad thing for some, but I felt like that feeling was there a bit too much. That, plus the Story sometimes made no sense to me. Sometimes I thought maybe they are just trying to get something similar to Far Cry 3; especially with the Ajay storyline, but what I didn’t understand was the part where a person who has no skill pulling off huge missions when there were all these other people from the Golden Path out there to help us achieve it. I get it, it’s a game, but still it didn’t feel like it was properly done. Maybe it’s me, but I would love to hear your thoughts in the comments.

The radio stations in Kyrat played that same message from the Ministry over and over again, and that got quite annoying after sometime. It’s true that it adds more value to the game and the story, but in the meantime it gets pretty boring too. Hey, maybe I’m nitpicking here.

I also felt like the character build up in Far Cry 4 was not that good, except when it came to Pegan Min (because I thought he had a great backstory and great vigor in this act and he had the hype built around him even before the game came out). Some Characters felt a bit interesting like Sabal and Amita and some felt dull like Ajay and some side characters. I thought a better understanding about the main player would have been nicer. Overall I think Far Cry 4 was a good game. It’s true that some moments of the game felt the same to parts in Far Cry 3, but still there were tons of new stuff. Riding Elephants and Destroying Enemies is totally fun and taking down fortresses in Co-Op mode is totally fun too.

The Map of Far Cry 4 seemed to be done well overall, with great attractions and surroundings. It was filled with fun and extra activities like mentioned before as well. It will take you around 20 hours to fully complete the campaign missions, but even after that the game is not over, and that’s another plus.

It’s true that there are a few weak points in the game, but I think the Good points are stronger than the weak points,and I highly recommend Far Cry 4 to anyone who is looking for a Great Game. When you actually play the game for sometime, you will know what I mean. If you didn’t pick up Far Cry 4 yet, Please do.

If you got the game and if you played it all well, why not share your thoughts about the game in the comments section below? Don’t forget to share this with your friends as well.