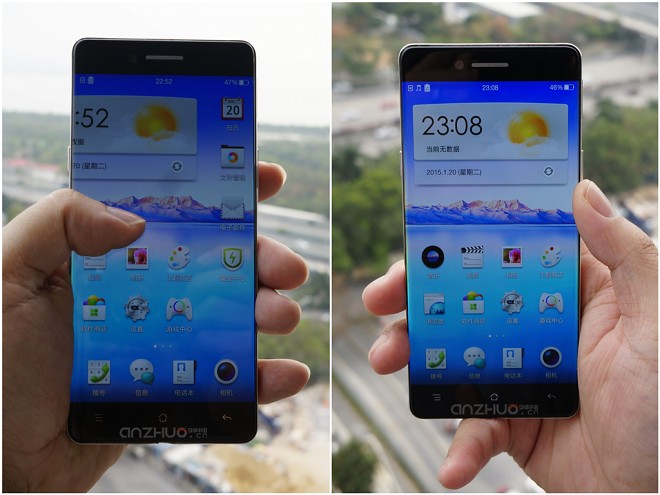 Most of us were waiting for a mainsteam Bezelless Phone, and now it Looks like it’s finally going to happen. New Images have surfaced which shows a Upcoming Oppo device without Side Bezels, and they have even filed a patent about this in China.

According to GSMArena, who first reported on this, “It does so by the use of clever light diffraction, which makes it seems like the display panel extends further sideways than it actually does.”

The upcoming device is going to be 5.5″ according to the Source, and it will also use a similar technology as used in the Sharp Aquos Crystal but not the same.

Looking closer at the first shot, the one in “mid-swipe”, it does seem that the numbers and symbols are slightly distorted once they reach the edge of the display, where the illusion takes place. This might simply be due to the change in surface angle or maybe the photo is slightly out of focus. There are some concerns around the technology and how it affects image quality and clarity toward the edges, but it is too early to comment on the matter and the photos are not really enough to go by.

At this point we are not sure how well this new display technology will turn out, and how they will perform.

This is also filed as a patent, and according to the source it has been granted, so we should see it online soon. Stay tuned to Andro Dollar for an update on that.

That being said, there is still a chance of this being fake, although it looks pretty real.

What do you think about the leaked photos? Do you think this will be Next Trend?