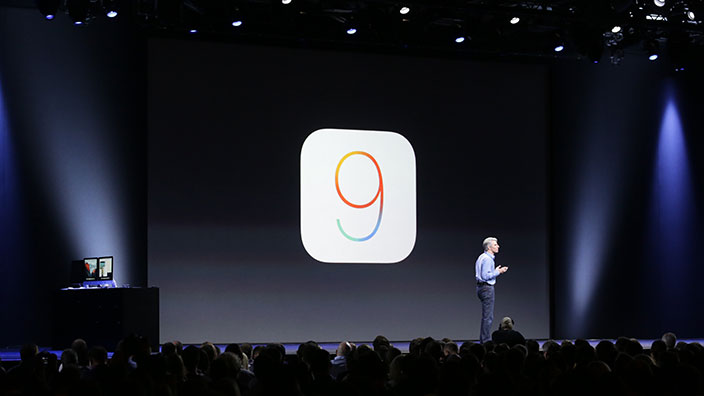 Apple held their annual developer conference WWDC, and this year, they unveiled iOS 9 to the public.

Apple’s Craig Federighi said the goal of iOS 9 is to “elevate the foundations of the platform” with a focus on fundamentals like battery life, performance, and security.

With iOS 9, Siri is getting better with a new UI which has a nice look. Siri offers plenty of new features. You can, for example, ask her to show you photographs you snapped in June, and have that pop up. There’s also a brand new Search, and a new Search API, so you can search inside applications that are installed on the device. Apple’s mobile payments service, Apple Pay is also getting better with iOS 9. Apple Pay is coming to the UK and will be compatible with more banks and credit card providers. Apple is finally killing off Passbook for Wallet which integrates credit cards, debit cards, store cards, and loyalty cards in one place.

There are some incremental updates to some other apps like Notes & Maps. What’s totally new for iOS 9 is “News”. It is a News Aggregator app which collects all the news from a variety of sources. Articles are presented in a mobile-formatted layout that loads quickly and has informative animations and full-bleed images. There are many partnered organizations that provide amazing content. Apple claims the app will get smarter the more its used and will suggest content and articles based on what you prefer to read. News will be first available in the US, UK, and Australia.

One of the Major changes coming to iOS 9 is in the Multi tasking department. Most of us cheered for this one. Split Screen Side by Side Multitasking is finally coming to iOS 9. At the moment we can use just 2 apps side by side, and Apps can be split 50-50 or 70-30 on the screen, and the iPad’s existing multi-finger touch gestures work in either side.

Videos can be watched in a picture-in-picture viewer that can be moved around the screen, very much like Samsung unveiled with the Galaxy S3 back in 2012. Apple says that the split-screen mode will only be available on the iPad Air 2 (and new iPads announced later this year), while picture in picture and the ability to swipe in apps from the side will come to older iPads.

There are some other special features for the iPad like the special on-screen keyboard includes shortcuts for cut, copy, paste, and more, as well as a new mode that turns the keyboard into a trackpad as well.

Apple says iOS 9 is more efficient and smaller than ever. You also need less storage to install iOS 9, which is just 1.8GB down from 4.6GB that iOS 8 needed last year.

Apple also says iOS 9 has a new “low power mode” that can squeeze another three hours of battery life out of a single charge. iOS 9 will also include a new system font, likely based off of the San Francisco font on the Apple Watch which most of us saw coming.

Apart from those device, even the iPhone 4s and iPad 2 are compatible with iOS 9.

iOS 9 is now available as a Developer Preview for registered Apple Developers followed by a public beta in July and the final version will come in September with the new iPhones.

That’s about it with iOS 9. Not a ground breaking update in any way, but if it fixes a lot of bugs and issues that will help a lot. If you have a compatible iDevice, you can follow my tutorial and install the latest iOS 9 Developer Beta on to your iDevice without a Developer Account. Check it out here.