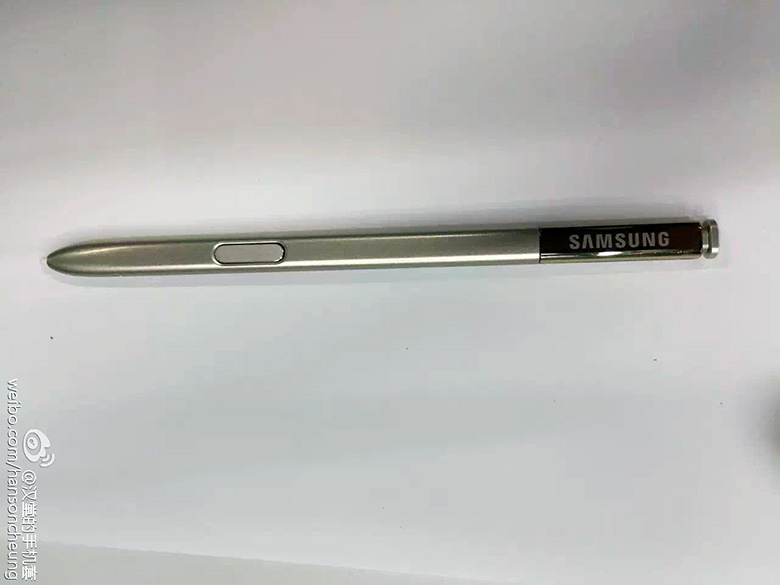 The Galaxy Note 5 leaks just keep coming. Yesterday we saw new renders that hinted that the upcoming Note will have a Pop out S-Pen, and today we have got a Alleged Picture of the S-Pen used on the Galaxy Note 5.

The leaked S-Pen seems to match what we’ve previously seen in the leaks, with a squareish end with round edges and a cutout towards the end so you could pull it out with your fingernail stuck in that cutout (Just like we saw with the previous S-Pens)

Aside from that, we have the usual Samsung Logo, Soft Tip at the front and button in the middle. We will have to wait and see what Samsung’s planning to bring to the table with the Note 5. Whatever it is, it seems to be very good so far from what we have seen and heard.

The Galaxy Note 5 is rumored to be released on the 12th of August ahead of schedule this year to have a headstart over the iPhones. The Note 5 is rumored to pack a 5.7″ QHD Display, Exynos 7422 SoC, 4GB of Ram, 16MP Camera with OIS and a 4100mAh battery. It will be running Android 5.1.1 out of the box. The phone will feature a Premium design just like the Galaxy S6 & S6 Edge as denoted by the renders.

So what do you think about the latest S-Pen Leak? What Else would you like to see with the Note 5? Drop a comment below, and Share this with your friends.