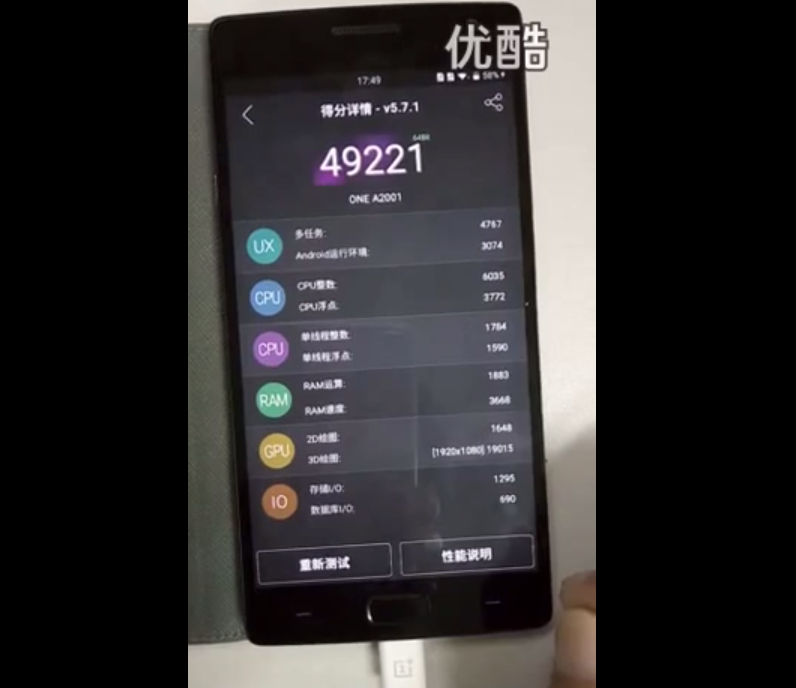 OnePlus is gearing up for the launch of the OnePlus Two and while the leaks and speculations continue about the upcoming “Flagship Killer”, Two new videos have surfaced and they show the OnePlus Two getting benchmarked using AnTuTu benchmark.

I know that you guys are here to see the results, so check out the two leaked videos first.

OnePlus 2 scored a bit over 49,000 in AnTuTu, which is a significantly lower result that the previously leaked 63,000 score from a few days ago. All in all, it appears that, in line with past reports, there will likely be 2 versions of the OnePlus Two. One will feature high end specs and one will feature slightly lower specifications. The model featured in the video is a A2001 model with 16GB of built-in memory. It runs on the China-only Hydrogen OS ROM, which is based on Android 5.1.1 Lollipop. The international version of the OnePlus 2 will run Lollipop-based Oxygen OS with Android M features according to the latest reports. It is rumored that the lower end version will feature a Full HD Display and the Higher end version will feature a Quad HD Display.

The high end OnePlus Two is confirmed to feature a Qualcomm Snapdragon 810 SoC, 4GB of RAM, USB Type-C, a fingerprint sensor and a price of under $450.

OnePlus 2 will debut on July 27 in virtual reality. The application for the device’s launch is already available in Google Play. If you didn’t download it yet, get it from here and be ready to experience the launch.

Stay tuned to Andro Dollar for all the latest regarding the OnePlus Two and share the news with your friends.