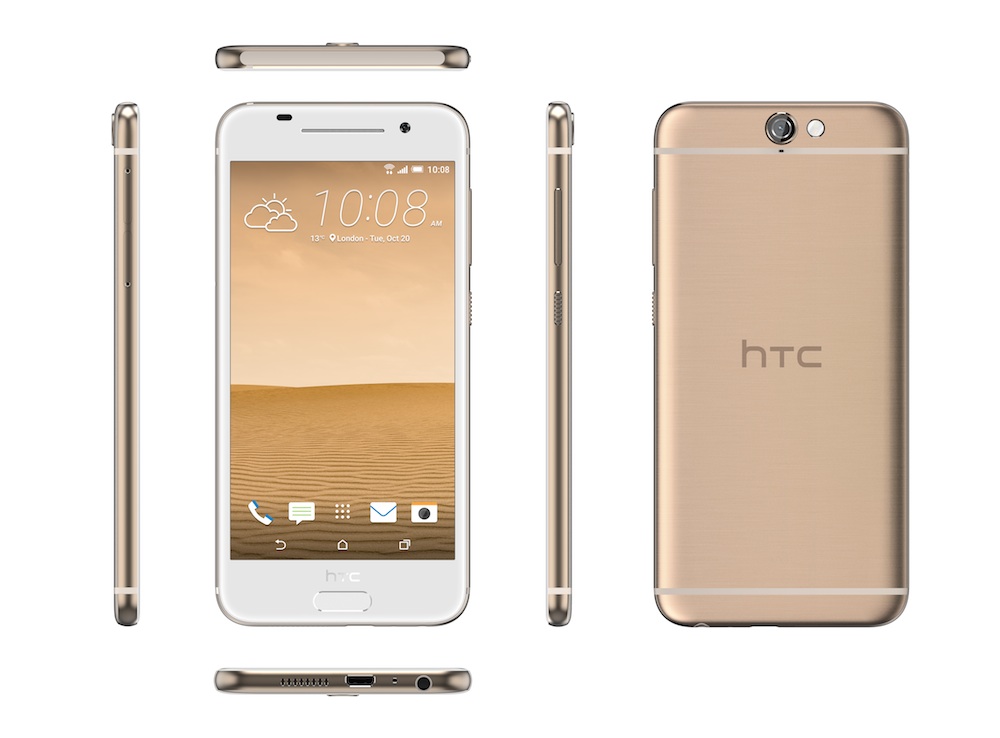 HTC unveils the HTC One A9 running Android Marshmallow

HTC’s much hyped new smartphone, the HTC One A9 was unveiled by HTC at a special event today. This is the first Non-Nexus device to be running the latest version of Android, Android 6.0 Marshmallow.

The HTC One A9 is comes with a 5″ Full HD AMOLED screen and it is the first to run on the Snapdragon 617 chip. It has the Adreno 405 GPU and 2 or 3 GB of RAM depending on the storage version, 16GB or 32GB respectively.

The design of the HTC One A9 looks drastically similar to the iPhone 6/6s, but HTC says it designed the One A9 from scratch, blending signature elements of its previous phones, such as the antenna stripes on the back (first used on the HTC One M7 in 2013). The A9’s unibody is made entirely of metal, with 2.5D Gorilla Glass 4 protective glass shielding the entire front. The One A9 is has a thin profile too at just 7.2mm of thickness.

The front of the device has a Home key which doubles as an always-on fingerprint scanner, which will unlock your device even while the display is turned off. You can also use the sensor for Play Store payments thanks to the Android 6.0 Marshmallow running on the A9 right out of the box.

The main camera of the One A9 packs 13MP sensor with optical image stabilization and 1080p video recording. It doesn’t support 4K since the Snapdragon 617 doesn’t support 4K. It supports RAW capturing and Hyperlapse (stabilized time-lapse) videos. The front facing selfie camera has a 4MP UltraPixel sensor and a bright F/2.0 aperture.

HTC One A9 comes with either 16 or 32GB of storage, expandable via a microSD slot. LTE connectivity is also onboard as expected. It also has a new high-power DAC promise unmatched audio experience.

HTC One A9 is powered by a 2,150 mAh battery, which supports Quick Charge 2.0 (and 3.0), though you’ll have to buy a proper 15W HTC charger if you want to charge your battery lightning fast.

HTC will be offering a compatible Dot View II case for the One A9 with enhanced gesture controls, plus you can opt for HTC Pro Studio In-Ear headphones for the best BoomSound experience.

HTC will launch the One A9 in the first week of November in 4 colours – Opal Silver, Carbon Grey, Deep Garnet and Topaz Gold. The pricing is yet to be announced.

Anyone excited for this new HTC device? Let me know in the comments below, and share the news with your friends.