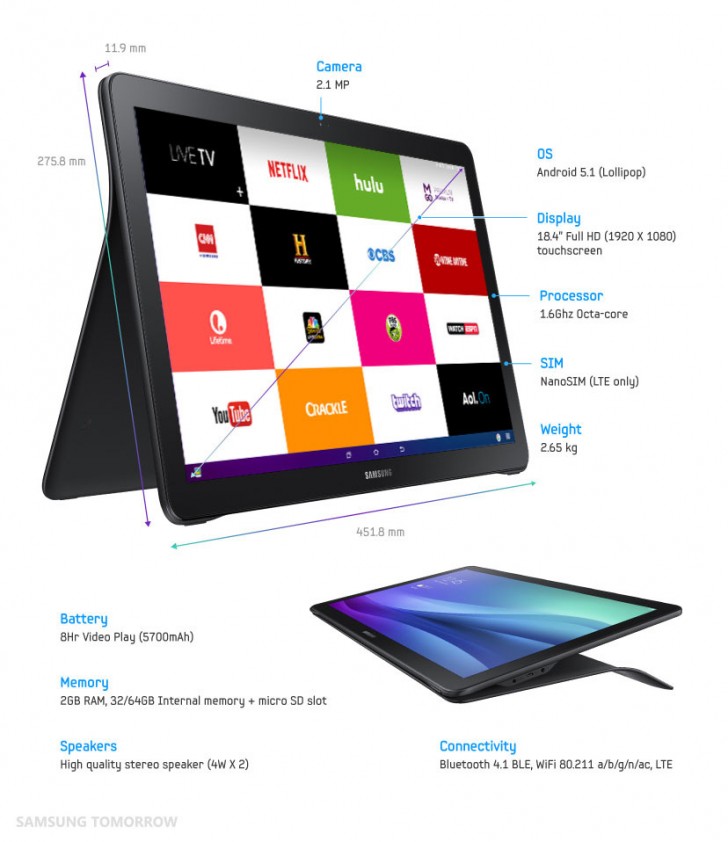 We heard rumors that Samsung is going to unveil a massive tablet very soon, and today is the day it has become a reality. Samsung has just unveiled the Samsung Galaxy View, which has a Gigantic 18.4″ Full HD Display. That’s right. I said 18.4″.

The tablet weighs around 2.65KG and the rubber at the feed at the bottom keep it from sliding and the back features a 2 way stand as well. The Galaxy View even comes with a handle so that it will be easy to carry. The Galaxy View is powered by the Exynos 7580 chipset with an 1.6GHz octa-core CPU and 2GB of RAM. It has either 32GB or 64GB Internal storage and it is expandable via the microSD card slot on board. Above the display, there’s a 2.1MP camera for video conferencing. Full suit of connectivity options are also available on the device as it packs Bluetooth 4.1 BLE, Wi-Fi 802.11 ac and an LTE model with a nano-SIM slot.

According to Samsung, the tablet has a 5700mAh battery and it can provide up to 8 hours of continuous video playback, although it’s pretty clear you won’t be going away from a power socket often. To enjoy media play back to the fullest, the Galaxy View has a dual 4W stereo speaker setup.

The company is shipping the tablet with a Media UX skin on top of Android 5.1 Lollipop and is placing a strong accent on video watching.

Samsung hasn’t officially revealed pricing and availability information. However, a prematurely online listing from US store Adorama reveals that the 32GB WIFI Only Galaxy View will cost $599.

Do you see a point behind a massive tablet like this? It is fun to see OEMs following different experiments once in a while. Do you see yourself even considering such a huge device? Let me know in the comments below, and Share this with your friends all over social media to let them know about the Massive gadget headed their way.