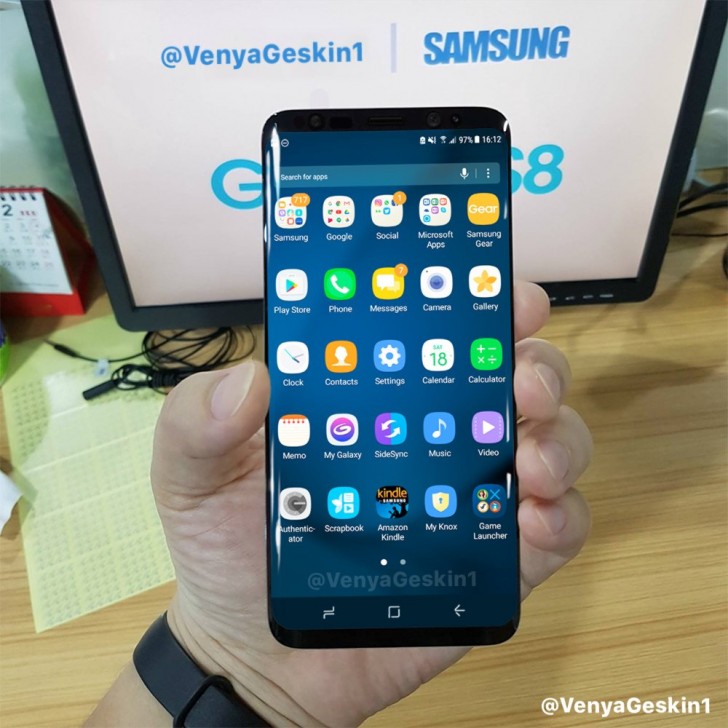 The Samsung Galaxy S8 Leaks just keep dropping. The latest set of images seems to be showing off a working device and all the ports of the device.

At this point we are not sure whether the device that has leaked is the Galaxy S8 or the bigger Galaxy S8+, but it sure seems to be pretty interesting and we know that both devices will be featuring the same design so that’s that. The leaked devices falls in line with most of the rumors we’ve heard so far: there’s no physical home button or any other capacitive buttons for that matter, the display stretches from edge to edge and flaunts a subtle yet noticeable curve, and finally, the topmost portion of the phone carries the seemingly correct amount of ‘cutouts’ for the front-facing camera, the iris scanner, and the rest of the sensors like we saw with the renders as well.

What’s intriguing in this leak is that it’s probably the first time we get to see the on-screen buttons that will allow users to navigate throughout the interface. As is tradition, the back button is positioned to the right in a signature Samsung fashion, which is contrary to the approach of almost all other manufacturers. There’s also the Apps edge interface, inherited straight from the Galaxy S7 edge, which houses shortcuts to apps and other useful features. Finally, we can also catch a few glimpses of the Always-on Display feature of the phone in a couple of leaked pics.

From the images we see the device will have dual-curved display right in front and On the top of the front panel there are plenty of sensors and cameras and we even see an iris-scanner. On the bottom we see 3.5mm jack, USB-C and a speaker, possibly by Harman.

According to the latest rumors, the Samsung Galaxy S8 will come in two options, 5.7”/5.8” and a S8+ version with 6.2” screen. It will be powered by Snapdragon 835 and will have a fingerprint scanner on the back and a Bixby AI dedicated button. The Galaxy S8 is tipped to come with a jaw dropping price of over $1000 as well.