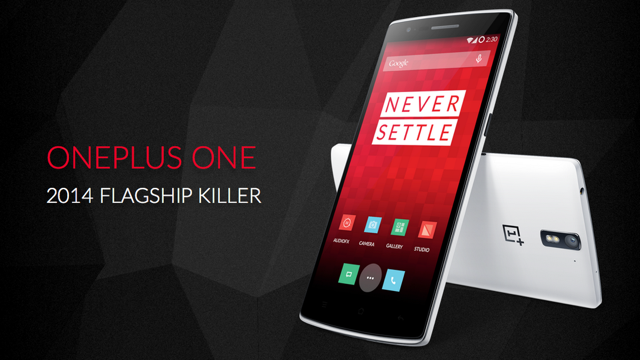 BREAKING NEWS : OnePlus One the Cyanogenmod Phone is Offical; is this the Next Killer Smartphone?

After months of Teasing, and Leaks OnePlus have taken wraps off the OnePlus One. It is one Killer Smartphone Package, and I think this will be One of the Best in 2014. OnePlus is calling this device the “2014 Flagship Killer” and we agree to some extent. The phone was made public today as the company announced its first device, powered by Cyanogenmod. With the Motto, “Never settle” the company is giving us the best of both worlds; Cheaper Price and Awesome Specifications. The OnePlus One runs CyanogenMod 11S based on Android 4.4 KitKat. The company has worked closely with the ROM team to release a special minimal and flat UI. There are also a bunch of custom themes and icons specially made for the device. There are Gestures similar to the one’s found on the Oppo Find 7. The OnePlus One is built from Magnesium and it weights 162 grams. In fact, OnePlus claims this is the lightest 5.5″ smartphone in the world. At the bottom of the device, there are dual stereo speakers and popular audio company JBL helped for their fine tuning according to OnePlus. The back cover of the OnePlus One is removable. But Sadly, the 3,100mAh battery isn’t user replaceable. OnePlus is also launching special StyleSwap covers. Available in bamboo, wood, denim and kevlar, the StyleSwap covers add a dash of personality to the One similarly to the Moto X’s Customization. A Micro SD Card slot is Not Available on this device. The OnePlus One features a 13 MP Sony IMX214 Sensor with 6 Lenses and f/2.0 Aperture. We already saw it in action in the hands of a professional photographer as well as its 4K video recording skills. The camera is capable of quick shutter speed of 0.3 seconds. The OnePlus One will be offered at launch in two versions Unlocked versions and both of these have Global 4G LTE Capabilities. According to OnePlus the device will start shipping in Late May. The other interesting thing about this device is the way you can buy it. The OnePlus One will be available through an invite system Only (at-least at launch). This means that only people who received an invitation from one of their friends or from OnePlus will be able to buy the device. After buying the device, you will receive a number of invitations that you can send to friends interested in the OnePlus One.

For now, the only way to secure an early invitation seems to be OnePlus’ “Smash The Past” contest. In exchange of smashing/Destroying your old phone, you will get to “buy” a OnePlus One for $1. There are 100 devices at stake, and each winner will be able to invite some friends to buy the phone. You only need to submit your email address to enter the contest. You can Check it out here. Checkout the Introduction Video of the OnePlus One below.

So what do you think about the All New OnePlus One? Do you think this will be the Next Killer Smartphone? I think it’s an Amazing Device with an Amazing Price. I also think that this device has a lot of potential. I will definitely be trying to get my hands on a device to make some great videos on Youtube for you guys. Leave Your Thoughts down below and don’t forget to share this with your Friends on Social Media..