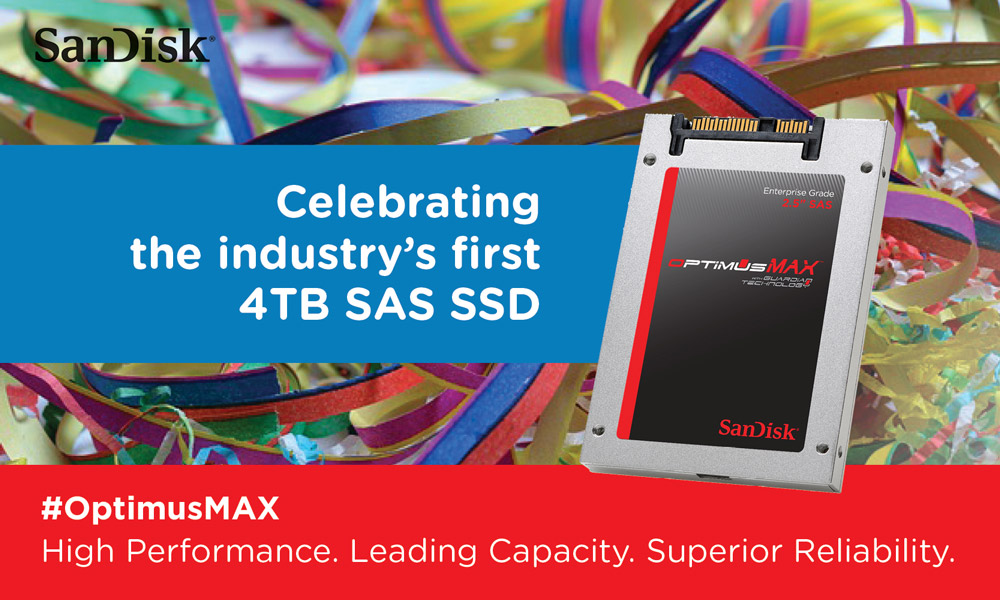 SSDs have become a must have for most of us. SSDs are Fast and Reliable, and a lot of people get that regardless of the price, because of the perfomance. Till now the main problem with a SSD was the lack of Storage, but now Sandisk is trying to fix it by rolling out a new 4 TB SSD.

The manufacturer’s first offering is the 4 TB Optimus Max Serial Attached SCSI SSD, which SanDisk claims is ideal for datacentre usage. The drive will be built on SanDisk’s 19 nm manufacturing process. SanDisk claimed that the SSD can handle anywhere from one to three full data writes on a daily basis. Being an enterprise class SSD, the Optimus Max comes with a slew of technologies that provide error correction and detection, full data path protection, and data fail recovery. Drives in the Optimus Max range will be sold through channel partners, and as such SanDisk has not divulged any pricing information. Sandisk also said that it has stated working on a 6TB and 8TB Version of this SSD,and they said those will launch in 2015.

In addition to the Optimus Max range, SanDisk also released the Lightning Generation II series, which comes with a 12 Gbps SAS interface. There will be three variants in this series: Lightning Ultra is the high-end offering which can handle 25 full writes, while Lightning Ascend is the mid-tier offering and can handle 10 drive writes. The Lighting Eco is the entry-level SSD and can handle three drive writes daily. Read/write transmission is at 1,000 MBps and 600 MBps for these drives, and they will be available in storage variations of 200 GB to 800 GB. The 4 TB Optimus Max as well as the Lightning Generation II SSDs will be commercially available sometime in Q3. What do you think? Storage problems solved eh? Now start collecting money, because this is not going to be cheap. Stay tuned to Andro Dollar for more.