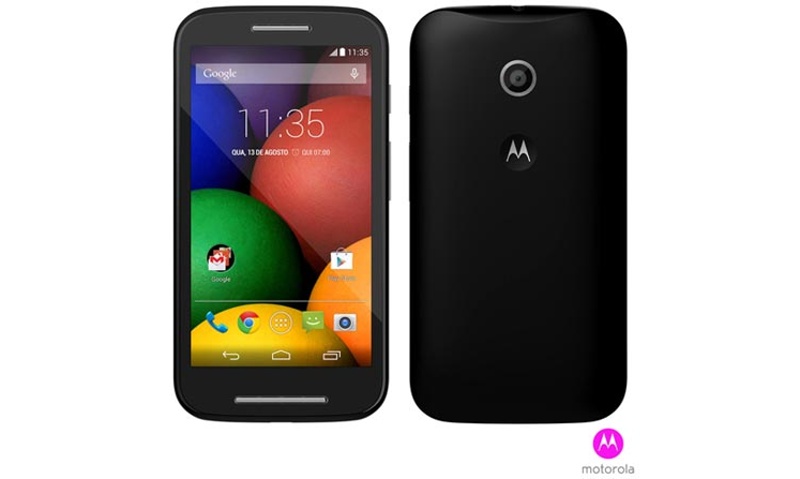 Motorola’s budget smartphone has surfaced on the internet a couple of time now and finally we see some press renders of this device ahead of it’s offical launch event, which is going to be on the 13th of May.

Photos of the Moto E first appeared on Motorola’s Mexican Facebook page and on HelloMotoHK yesterday. This photo shows a comparision between the Moto G (Left) and Moto E (Right). From what we know so far it will include Qualcomm Snapdragon chipset with a 1.2 GHz dual core processor, a 4.3-inch, 540 x 960 display, 5-megapixel camera (with no front-facing snapper), 4GB of storage space (expandable via microSD up to 32GB), and 1GB of RAM. Moto E will come out with standard connectivity options like Wi-Fi, 3G and Bluetooth. Moto E will run on Android 4.4 KitKat out of the box and according to the listing, the smartphone is guaranteed to receive the next major Android operating system update. and Finally, the device will pack a 1,980 mAh battery. Motorola Moto E will be available in Black, Turquoise and Lemon colour options. Motorola is also including 3 colour covers to let you personalize your phone. This will be the Perfect phone for a person looking for a budget oriented phone. Let’s wait and see what the Offical Price is going to be, we assume it is going to be around $100.

Indian online retailer Flipkart, has sent out the below teaser on their social media accounts. The website says ‘4 days to go for the new Moto’, meaning the phone will go on sale on May 14, even if the actual launch is on May 13.