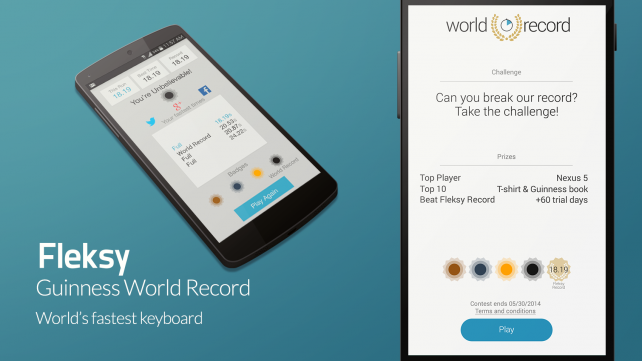 Fleksy is one of those keyboards on Android that tried to be Unique in it’s way, by the looks and features. When a Keyboard is having an Awesome Level of Auto Correction, a lot of people start to use it and like so A long time Fleksy user, Marcel Fernandes, took part in a speed texting test at an official Guinness event and broke the record for Fastest texting on a touch-screen mobile phone.

Fernandes was able to type the 160 character paragraph in just 18.19 seconds using the Fleksy keyboard. The Phrase that was used for this was,

The razor-toothed piranhas of the genera Serrasalmus and Pygocentrus are the most ferocious freshwater fish in the world. In reality they seldom attack a human.

We are totally impressed by this achievement, and I think the Auto-correction ability of this keyboard is the Key to his success. The Keyboard learns your moves as you type, and it just gets better each time.

The previous record time of 18.44 seconds was held by Gaurav Sharma, who used Swype style, Word Flow on Windows Phone 8.1.

That is what makes the Fleksy keyboard so unique. The team at Fleksy has been making the keyboard so amazing through each update. The Keyboard has some Unique Features and amazing text prediction and correction engine. It also has an invisible keyboard mode. Just think about it, Who really needs a keyboard to look at when Fleksy can figure out what you mean anyway? This can be the Future of typing.

We’ve been passionate about building the most comfortable, beautiful, and fastest smartphone keyboard ever since we started. The Guinness World Record is a great testament to our progress, and we are pleased that our latest improvements make Fleksy the world’s fastest keyboard for smartphones.”

To celebrate this latest milestone, the team at Fleksy has updated the app for iOS and Android and is offering extended trials and app discounts. In iOS, the update adds support for 6 more languages. For Android, the app has been updated with a new World Records Challenge, which will allow you to try and beat the new world record set on a Fleksy keyboard.

Fleksy is also offering its keyboard for 50% off in Google Play until May 29th and the free trial has been given two extra weeks on top of the initial 30-day time period. Don’t miss this chance, get it now.

So are you impressed by this performance? Don’t forget to take part in Fleksy’s In-App competition.