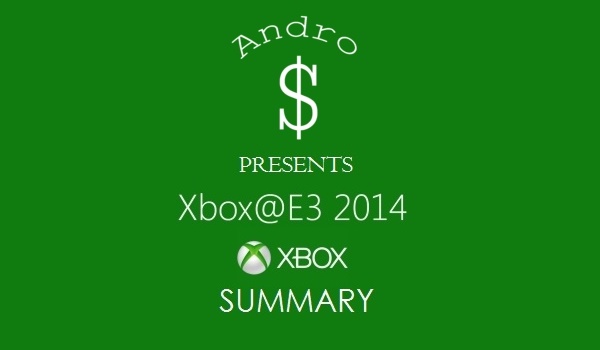 E3 Fever has Now Officially begun. E3 will be held from June 10-12th at the Los Angeles Convention center. Microsoft was the First to hold a Media Briefing to show off the brand new games for their shiny new console, the Xbox One. This is the run down of what happened and what got announced.

In case you missed Microsoft’s Press conference, you can watch it down below.

The First game that was shown off was Call of Duty Advanced Warfare. The DLC of Advanced Warfare will be an Xbox Exclusive in the beginning. Microsoft then went off to show a gameplay demo of the game, and it looked awesome. Check it out Below.

It was Forza’s turn next. Forza Horizon 2 got announced by Turn 10, and it will feature full day/night cycle, weather, and will be in 1080p. They aim to create multiplayer entirely free of lobbies and with minimal waiting times. Finally they revealed the release date for Forza Horizon 2, which is the 30th of September. Below is the Trailer for Forza Horizon 2.

Next 2K’s Evolve got a short trailer and 2K said that it will have an exclusive beta and timed exclusive DLC for Xbox One. Checkout the trailer for Evolve below.

Next a short trailer for Bioware’s Dragon Age: Inquisition was shown off and it was said that this will be a another timed exclusive DLC on Xbox One. Checkout the trailer below.

Sunset Overdrive is next up. It also got a Trailer released and Insomniac’s Ted Price took the stage to demo a mission. This game is Very reminiscent to classic Sega titles like Crazy Taxi and Jet Set Radio. Checkout the Gameplay trailer below.

Next it was announced that Dead Rising 3 is getting an ‘arcade adventure’ by the name ‘Dead Rising 3 : Super Ultra’. This game will Feature new characters, moves, stages, and generally more zaniness and this will be Exclusive to Xbox One and It’s out now. Checkout the gameplay trailer below.

The Kinect didn’t have much to do at Microsoft’s Press Conference this time around. It just got one game under it’s name, and that is Dance Central: Spotlight. This new Dance Central game is Exclusive to Xbox One. Dance Cental: Spotlight will be digital only, and it will be Out this Fall. Checkout the Trailer for that below.

Lionhead’s Fable Legends is next. It was announched that the Multiplayer beta is coming this year and then a Demo showed off 4 player co-op just like on Assassin’s Creed Unity. Checkout the Gameplay trailer below.

Next Ori ad the Blind Forest got announced as an Xbox One exclusive after getting a nice trailer. Check it out below.

Next News maybe the Most Exciting News that happened at Microsoft’s event. It’s time for Halo. Bonnie Ross took the stage and She announced Halo: The Master Chief Collection for Xbox. This will be released on the 11th of November and this will Include Halo, Halo 2, Halo 3 and Halo 4, all playable through a single interface. Halo 2 is being completely revamped. This will also include the multiplayer, with Every Map Ever Released for all 4 games. All the games will run in 1080p, 60 FPS. Checkout it’s trailer below.

It was next announced that Halo 5: Guardians beta will be out this holiday season. It also got a trailer and you can check it out below.

Xbox Mentioned that from now on-wards, all the games that were being spoken of will be games that are coming out in 2015.from their 2015 portfolio’ are going to be shown.

Next a A fantastic-looking, and once again haunting, follow up to Limbo called Inside was shown off and this will also be a Xbox Exclusive at first. Checkout the Trailer below.

Next a Trailer was shown, showing off tons of upcoming ID@Xbox games. Check it out below, it had some good ones.

Next Square Enix and Crystal Dynamics announced 2 new Tomb Raider games with impressive trailers. First up was Rise of the Tomb Raider, a direct sequel to 2013 game. This will be released in 2015. Checkout it’s trailer below.

The Second was Lara Croft and the Temple of Osiris. This serves as a follow-up to 2010’s top-down adventure Lara Croft and the Guardian of Light, which offered co-op play and environmental puzzles to solve in order to progress. Osiris was not given a specific release date, but it was said that it is ‘coming soon’. Check out it’s trailer below.

The Witcher is getting a new game and it will be The Witcher 3. As expected the graphics look stunning in the gameplay demo that was shown off. Check it out below.

Next Phantom Dust got announced along with a trailer. This will also be another Xbox One Exclusive. Checkout the trailer below.

Next up is Tom Clancy’s The Division. This is another hyped up game and I was pretty excited to see this. It was said that ‘New content’ will be ‘First on Xbox One’, meaning this will be another timely Xbox One Exclusive. A Gameplay Demo was then shown off and it looked good. The graphics were very good. Checkout the Gameplay Demo trailer below.

Next another Xbox One Exclusive game was announced called Scalebound. Checkout the trailer below.

CloudGine then announced another exclusive for Xbox One called, Crackdown 3. It also looks like another cool game and it also got a trailer released. Check it out below.

Finally the Press Conference ended after Spencer noting how “humbled” and “amazed” he was by the community’s support of Xbox One. He then personally thanked the fans.

That’s All You Need to know about Microsoft’s Press Conference at E3. Hope you found it useful, and if you did don’t forget to Share this with your friends. Finally don’t forget to drop your thoughts down below in the comments section.